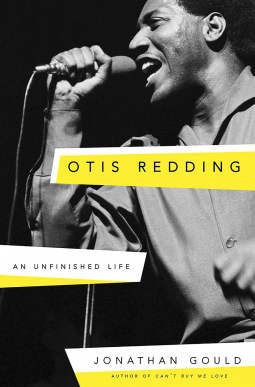 In addition to being a biography about Otis Redding, this book also talks about the area around him and what the times were like for everyone as a bit more of background so you can really understand what was going on at the time.  I was sad to see that only 1 photo had survived from Otis’ childhood.  Otis knew that Sitting on the Dock of the Bay was going to be his million dollar selling song, but I don’t think he realized that just days after recording it in 1967 he would be killed in a plane crash and it would top the charts becoming the first posthumous single to top the charts in the US.  Many used Otis’ death as a commercial opportunity to make money by selling his records.  This was a very interesting and very thorough biography and a very sad story.

A definitive biography of Otis Redding, the musical artist who was widely regarded as the quintessential soul singer of the 1960s, timed to coincide with the 50th anniversary of Redding’s iconic performance at the 1967 Monterey Pop Festival.

Otis Redding remains a living presence in the canon of American popular music on the strength of such classic hits as “(Sittin’ on) The Dock of the Bay,” “I’ve Been Loving You Too Long (To Stop Now),” “Try a Little Tenderness,” and “Respect,” a song that Redding wrote and recorded before Aretha Franklin made it immortal.  As a singer, songwriter, bandleader, and arranger, Redding was the chief architect of the distinctly southern, gospel-inflected style of rhythm & blues associated with Stax Records in Memphis.  Yet, while Redding’s music has long served as the gold standard of 1960s soul, an aura of myth and mystery has always surrounded the story of his life, which was tragically cut short at the height of his career by his death in a plane crash in December 1967.

Otis Redding is the biography that finally does justice to the unfinished life of the man who was once celebrated as the “King of Soul.”  Jonathan Gould’s book draws on comprehensive research, the cooperation of the Redding family, and previously unavailable sources of information to present a fully-formed portrait of Redding’s background, his upbringing, and his professional career.   That said, this biography is not only a book about Redding and his music; it is also a social history of the time and place from which they emerged.  Rejecting the often sentimentalized view of race relations in the music business, Gould never lets us forget that the boundaries between black musicians and white listeners were becoming porous at precisely the moment when racial tensions were reaching a height throughout the United States.  His indelible portrait of Redding and the mass acceptance of soul music in the 1960s is both a remarkable look at a little-understood artist and a provocative exploration of the tangled history of race and music in America.