Coming up in just a few months I will be taking a crazy trip half way across the world to see Hanson in Australia and New Zealand! Since I have already started mentally packing you will see some of the travel items I will be taking with me coming up as blog posts.  Of course in order to take a trip to a new country (or two!) you need to have your passport.  I chose to use the USPS passport location closest to me to get my passport renewed. I have always had good exepeiences with them. One thing I have not yet done is travel with a passport cover, but for this trip I figured, why not?

Heads Outlet USA on Amazon has several options available – I opted to go with the blue option, although it looked a bit more on the teal side on their website and is a bit darker now that it has arrived. (And it was also addressed to a name that was not me so I am not sure what happened there with Amazon fulfillment)  There is a happy plane on the front cover along with the text of several cities that you might want to take a trip to – I was happy to see that Sydney, one of the stops on my trip, was included! I guess now I just have to work on hitting up all the others that are listed as well in future trips!

The passport cover is very stylish and durable. It is available in several vibrant covers to keep your passport protected and looking great. It even includes an extra pocket for your boarding pass.  On the inside there is a slip-in compartment and on the right two full length slots giving you room for your passport and extra notes or documents you want to have handy.  The bright colors will make it easy to spot in your bag or to avoid leaving it behind.

I thought that the material it is made out of might have made it slippery, but I was able to keep a good grip of it in my hand when I was trying it out. It is also water resistant and you can wipe it off easily if you happen to spill something on it when traveling – or in my case someone else happens to spill something on you when you are traveling! 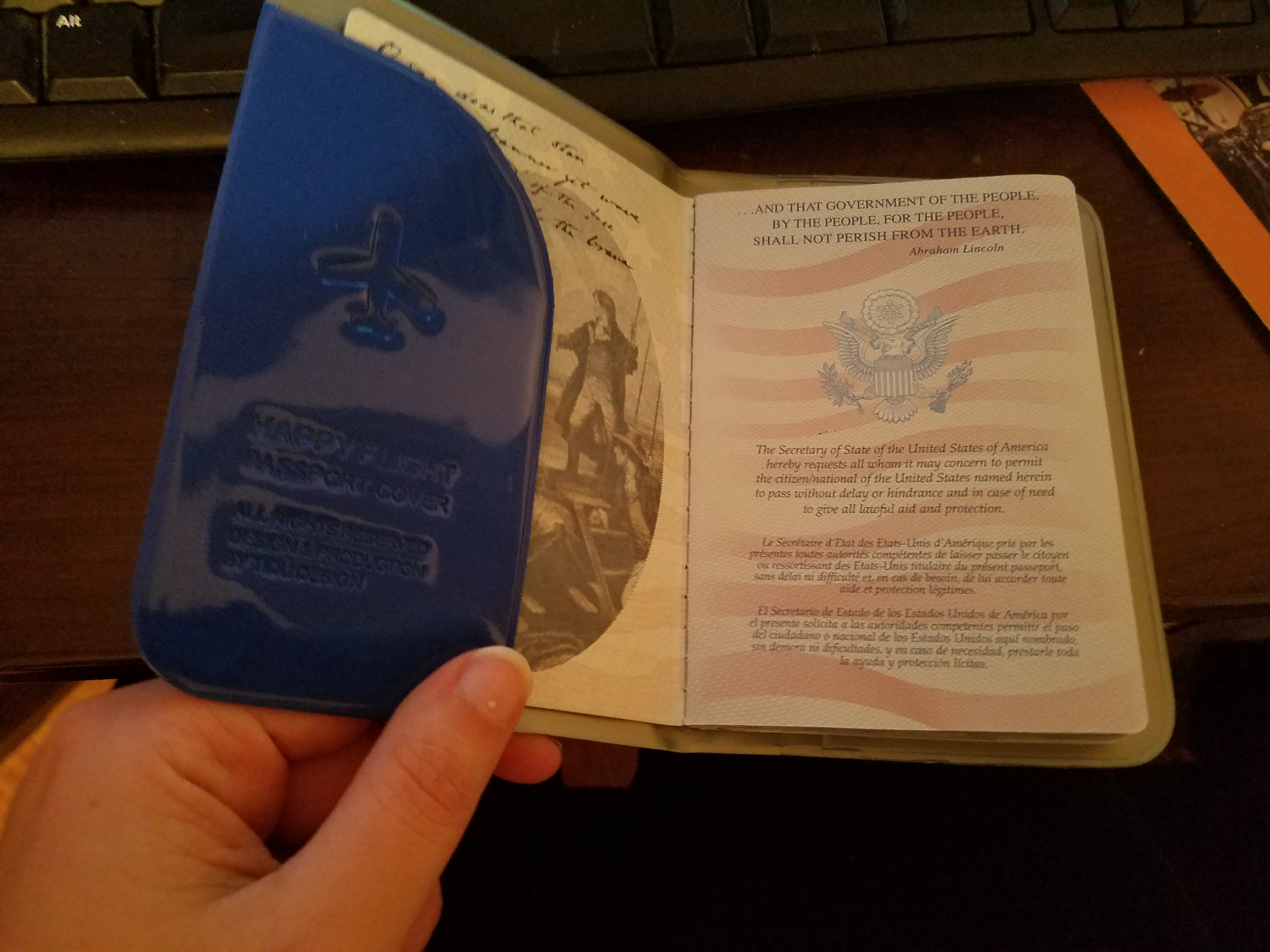 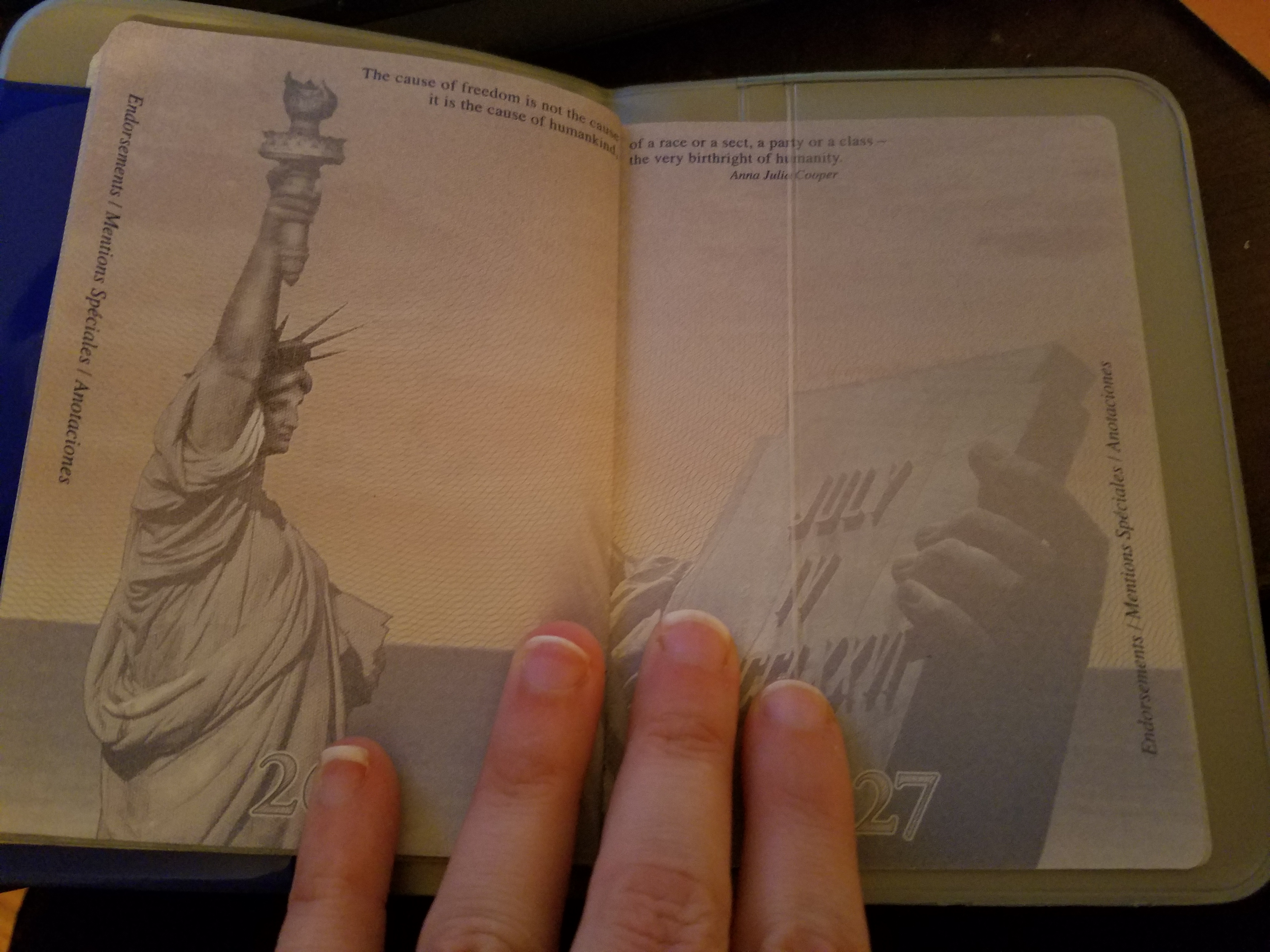 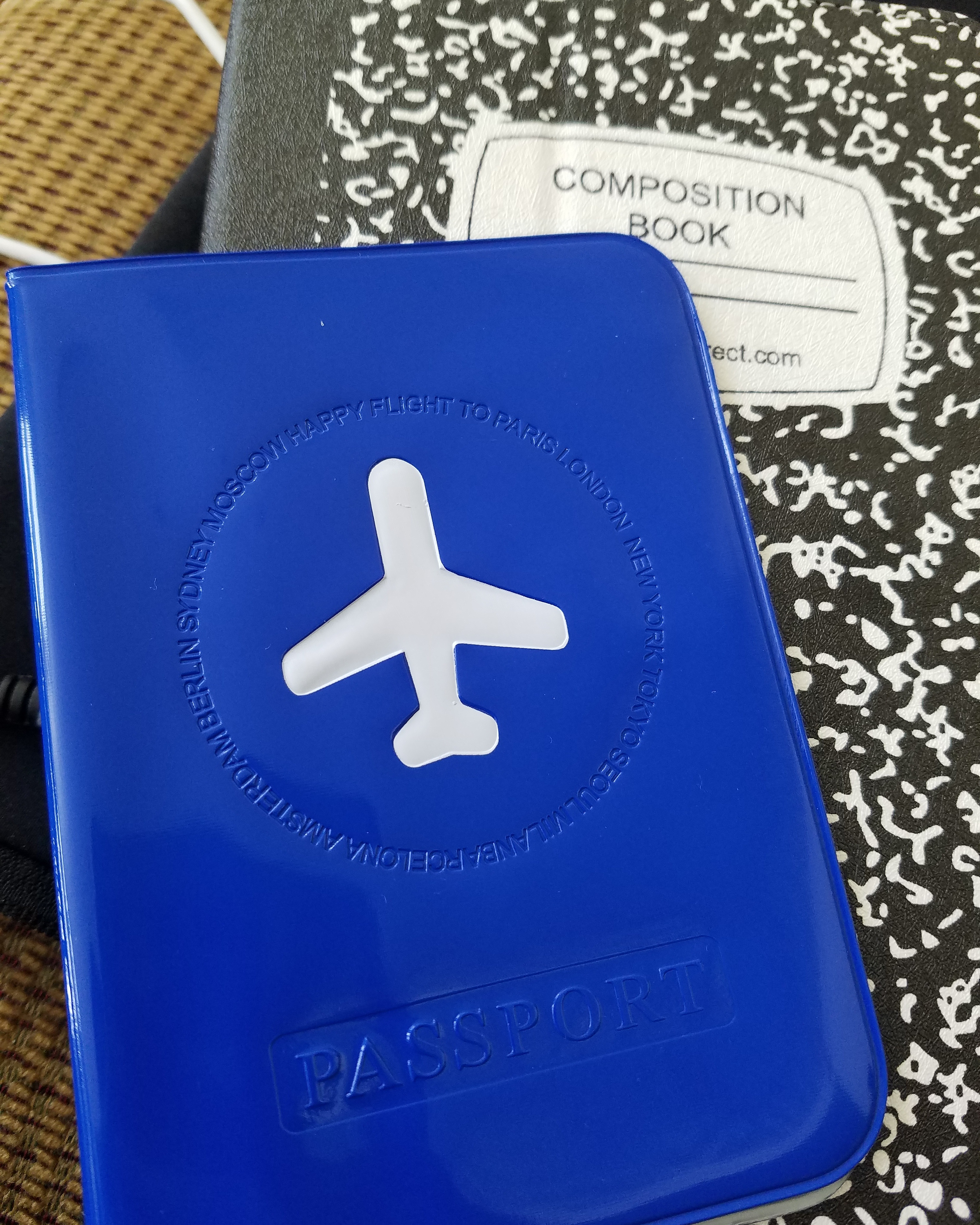 I received this product at a discount in order to write this review. I was not otherwise compensated.

After leaving the comic con, we decided that we might as well try for 2 *NSYNC members in one day and we once again split off 2 and 2 – this time myself and Casey headed to Mohegan Sun on a mission to find Joey Fatone who was hosting the “Freestyle Loves the 90s” concert at the arena.  While I thought I was, in every sense of the words, a “90s kid”, there was only one act on this bill that I knew who they were – Tiffany.  And honestly, I’d consider her more of an 80s act. And I had seen her before.  So really, the only reason I wanted to go into the venue was to see Joey.

We had debated just waiting to try and find Joey outside in the casino somewhere but when SECOND ROW tickets opened up as we were asking about tickets, we decided to buy them.  Probably not one of our smarter ideas, but at least we did get to see Joey.  Except for the fact that there were 14 acts and we saw 4 of them before he ever graced the stage and it was probably the worst concert I had ever been to.  But, it was also the closest I had ever been at the arena.  When you’re that close you can see who is performing with their fly down and which lady completely ripped her pants in the middle of her set. And how one act went on stage with her reading glasses on her shirt and then lost them by the end of her set.

After the show we tried to find Joey and figured out he was in the club, Avalon, but it being a Saturday night the line was insane and there was no chance that we were going to be making it inside. Turns out that was exactly where he was all night. 🙁

We did end up seeing just about every other act who was in the show with the exception of Tiffany and Joey, of course, the two we wanted to spot! Just another thing to add to the list of stupid things I have done for boybands. 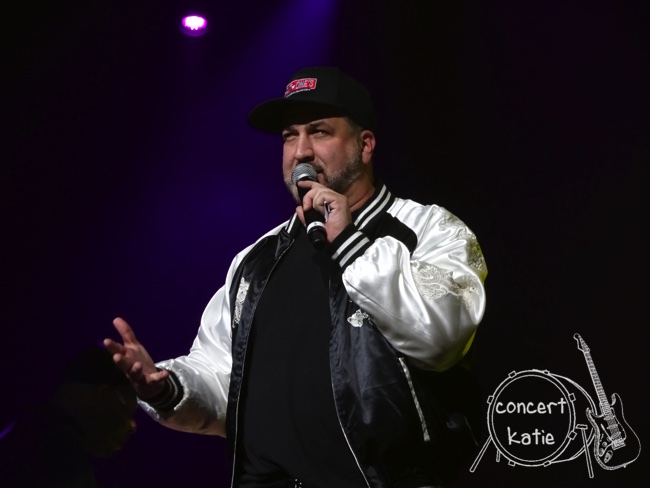 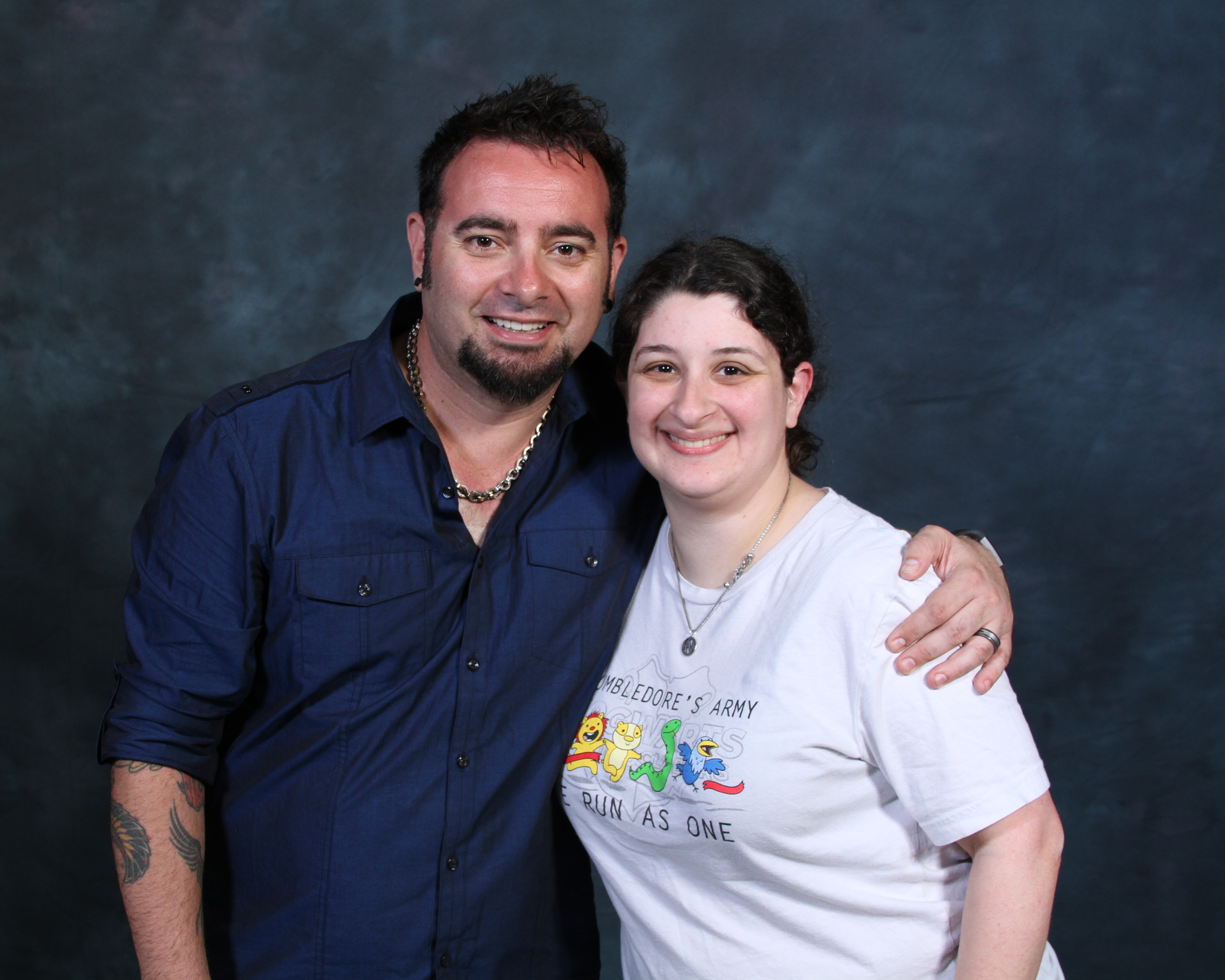 A few weeks ago our “boyband SOS” was alerted when we found out that Chris Kirkpatrick from *NSYNC would be attending a Comic Con in Massachusetts.  We not so patiently waited for the day to arrive and jumped in the car and headed the 1.5hours or so up to MA. We had pre-purchased tickets to get into the con and despite checking every day, Chris’ prices for photos and autographs were still “TBD”.  When we arrived, we headed straight over to his table, which appeared to have the longest line.  Quickly we found out this was because he was taking the time to chat and take photos with everyone for quite some time.  This wasn’t a problem because we knew that he would talk with us for quite some time as well!

It was $40 to get something you brought signed and $60 to get a signed 8×10 and a “selfie”.  Our group was 4 so we split in 2 and 2.  Christine and Casey went first and Casey has *NSYNC shoes (which I may have mentioned here before) that she wanted to get signed.  Then it was mine and Lauren’s turn.  I wasn’t sure what to talk to him about but had decided that any mention of an *NSYNC reunion probably wasn’t the best idea (since everyone was probably mentioning that to him!) so I opted to tell him congrats on the baby that he and his wife were expecting! He ended up telling me the complete story of how they had been trying for 3 years and how the baby was conceived.  We took our “selfie” and he asked me if my camera could make phone calls since everyone uses their phones for pics now.  Then I got a photo with Lauren and then Chris took a big group selfie of the 4 of us with him – and then announced the next photo would be funny faces – but got mad when Casey and Christine gave us bunny ears!

We then went to buy our tickets for the professional photo op with Chris and went to grab a snack while we waited for the time we were supposed to be back for the photos.  It turned out that we were essentially the only people doing the photo op with him (save for 2 guys who seemed to be doing photos with everyone and another family). It went quick but somehow it ended with him talking crap about Joey Fatone so of course I had to step in and defend and let him know Joey was my favorite which resulted in him yelling at me to NEVER say that to him again! hahaha.

Next thing we know we are outside and deciding where we should go for lunch and a car pulls up to us and asks us if we are going to eat… minutes later I am in said car WITH Chris and we end up having lunch with him. I honestly have no idea how it happened and we probably couldn’t make it happen again if we tried. But he talked about a LOT of stuff with us and out of respect to him I am not going to post it all over the internet. (Nothing really scandalous though – mostly sports and stories about “my man” Joey lol)  He did end up calling Joey and letting me say ‘HI’ though! 😀

I think we all may have a new favorite *NSYNC member now… Chris was incredibly nice and a lot of fun and if you have the chance to see him at a con definitely do it!