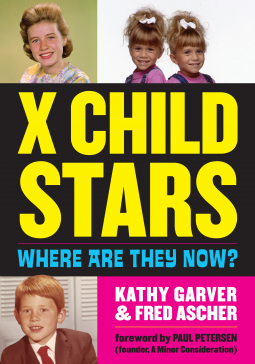 X Child Stars is a book about child stars and how some of them fall victim to “child actor syndrome”. The book is broken up by decades, beginning with the 1950s.  Each decade is then broken up by television shows with information on how many seasons it was on the air, what networks, from what dates and info on the child star(s) from that show.  This was certainly an interesting read as most of the shows were before my time, though I have watched several in reruns.  It is sad how many have fallen victim to child star syndrome, but uplifting how many have gone on to bigger and better things as well.

One quite that stuck with me from the book was:

“Our lives have proceeded apace, but those who watched as as children on television or in movies cling to old images of us while they, understandably, have gone on with their lives. They’ve changed, but their apprehension of us… as people…has not. And therein lies the trouble”

I definitely get that, as you are stuck in someone’s mind at a certain age and they don’t want to see you any older! It certainly must be tough.

This enlightening book is the go-to guide for fans for biographical information, rare photos, and interesting trivia about their favorite child stars, shows, series, networks, and the times that defined the shows. Spanning forty years of television history, this book details both the success stories and misfortunes of many child stars. Included in this book are the stories of Anissa Jones, Buffy on Family Affair, who tragically died from a drug overdose at the age of eighteen, as well as Ron Howard, who starred in both The Andy Griffith Show and Happy Days, and who later became an Academy Award–winning director. A child star herself, Kathy Garver profiles these and other legends of classic television in a book that will answer the question: Where are they now?

Family Affair, Kathy Garver has garnered many accolades in film, stage, TV, radio, and voice-over. An ex–child star whose career first took flight with the legendary filmmaker Cecil B. DeMille, she is an accomplished and versatile actress and performer. Kathy is also a UCLA graduate, attended London’s prestigious Royal Academy of Dramatic Art, and is noteworthy for her award-winning talents. She is a motivational speaker and the author of two previous critically acclaimed and best-selling books. Kathy lives near San Francisco with her family and dog, Coco.
Fred Ascher’s love of television—and appreciation of the child stars who formed the foundation of so many shows—only grew after he graduated from the University of Tennessee and settled in Southern California. Like so many kids growing up during the ‘70s, a time when Mom joined Dad in the workforce during the afternoons, Fred found solace in reruns of time-proven sitcoms and family dramas.
Writing X Child Stars with Kathy Garver is the culmination of a lifetime working with important people for important causes. Fred sees our child stars as an integral part of our nation’s tapestry, no less so than other cultural milestones. “They are our national treasures,” he says, “and with X Child Stars, Kathy and I show the reader why this is true.”