Book Review: The Girl On The Train

February 3, 2016 by ConcertKatie No Comments 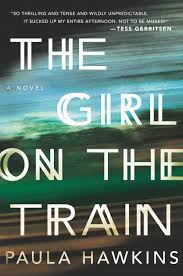 The Girl On The Train seems to be the hot new book to read, several of my friends recommended it to me and I saw several others reading it while I was on vacation in January. So I finally took the time to stop reading my review books to read something for pleasure (and here I am reviewing it anyway!)

This book took me two tries to start – although the first time I was incredibly distracted so I’m not sure if I will count that against it. I did have trouble getting into it at first but was told by my friends to push through – after the first 50 or so pages things pick up, so keep that in mind if you start it and aren’t quite sure the book is going anywhere.

I feel like the write up for this book hypes it up a lot more than it really should. The book is good, it’s an easy read, it’s a bit of a thriller.  Some are comparing it to Gone Girl but I don’t think it really should be compared – except that I guess both have a missing person in them?  I did like how The Girl On The Train ended a lot more than I liked how Gone Girl ended and Gone Girl as a whole kind of pissed me off whereas The Girl On The Train didn’t really get a strong reaction out of me either way. It didn’t end how I thought it would or in a way that shocked me, but it didn’t end in a non-ending kind of way either. There’s closure.

I think it’s worth a read, or wait for the movie.  But don’t think about any of the hype when you go to read it and I think you’ll enjoy it more that way.

A debut psychological thriller that will forever change the way you look at other people’s lives.

Rachel takes the same commuter train every morning. Every day she rattles down the track, flashes past a stretch of cozy suburban homes, and stops at the signal that allows her to daily watch the same couple breakfasting on their deck. She’s even started to feel like she knows them. “Jess and Jason,” she calls them. Their life—as she sees it—is perfect. Not unlike the life she recently lost.

And then she sees something shocking. It’s only a minute until the train moves on, but it’s enough. Now everything’s changed. Unable to keep it to herself, Rachel offers what she knows to the police, and becomes inextricably entwined in what happens next, as well as in the lives of everyone involved. Has she done more harm than good?

Compulsively readable, The Girl on the Train is an emotionally immersive, Hitchcockian thriller and an electrifying debut.