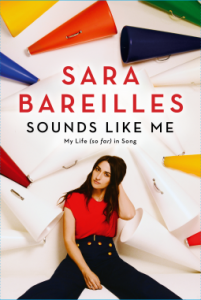 Sounds Like Me: My Life (So Far) in Song is a collection of essays from singer Sara Bareilles.  The book contains 8 essays, one of which she gets some friends to help her out on writing and speaking of friends – the book starts off with a forward by Ben Folds.  It took her 2 years to finally write this book and in that time she even wrote a musical!  There are pics throughout of Sara on stage, Sara growing up, etc.  Each chapter starts with a photo and lyrics to the song that the chapter is named after.  Some fun things… she went to college with Maroon 5 which is how she ended up opening for them, it tells the real, full story about Love Song – which was a bit more indepth than what I had heard previously (that her record label wanted her to write a love song so she wrote love song for them) and not so fun, about how she was opening for Sugarland when the stage collapsed a few years back.  My favorite chapter was the one where she wrote “Dear Sara” letters back to her younger self.

Overall a great book and one that I think anyone will enjoy whether they are familiar with Sara’s music or not.

With refreshing candor, Sounds Like Me reveals Sara Bareilles, the artist—and the woman—on songwriting, soul searching, and what’s discovered along the way.

Sara Bareilles shares the joys and the struggles that come with creating great work, all while staying true to yourself. Imbued with humor and marked by Sara’s confessional writing style, this collection tells the inside story behind some of her most popular songs. Most recently known for her chart-topper “Brave,” Sara first broke through in 2007 with her multi-platinum single “Love Song.” She has released five albums that have sold 2.5 million copies and spawned several hits. More than a privileged view inside the experience of a remarkable musical talent—this is a moving tribute to the universal search for growth, healing, and self-acceptance.