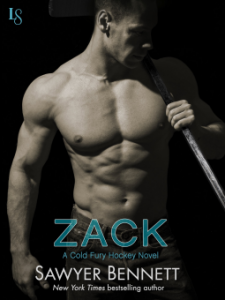 I obviously picked this book, Zack, because of my crush on Zac Hanson.  Imagine my surprise when I started reading it and realized that the lead girl in the book had the same name as ME… and Zac Hanson’s wife.  A funny coincidence that I wasn’t expecting, especially since I had chosen this book to review a while ago and had forgotten about what I read in the synopsis that led me to choose it. (If I even read it. Look at that cover, did I really need to see anything more about the book? haha)

There are a few other books in the “Cold Fury Hockey” series, none of which I had read before, but Zack worked fine as a stand-alone and there was enough background information on everyone and what had happened previously that I didn’t feel like I was missing anything.

Zack’s girlfriend / mother of his child was killed in a car accident and he has been trying to move on and care for his son, Ben.  He has been rehabbing and will be returning to his hockey team soon and will need to hire a nanny to help him out with Ben while he is at practice and on the road with the team.  His sister Delaney ends up picking someone and Zack agrees.

It’s pretty obvious that they’re going to end up hooking up. I mean, it’s a romance novel so you know something is bound t happen… but Zack is still grieving, Gina has only been gone a few months. But the attraction between Kate and him is undeniable. He wants to sleep with her, but he doesn’t want it to affect her relationship with him, or above all, Ben.

A bit of a rollercoaster at times, I won’t say what ends up happening, but I’m sure you’ve got your own ideas. I enjoyed reading this book, it was a pretty quick read and despite it being about hockey, not bad for a summer read by the pool either! It is interesting to see the dynamic between Zack and Kate change and I enjoyed that the chapters alternated between Zack and Kate being the story teller because Zack was more abrasive with more swearing and Kate was more southern and sweet in her story telling and it was a nice contrast.

I will have to see about checking out the other books in this series now!

New York Times bestselling author Sawyer Bennett goes for a hat trick with the latest romance in a sexy series about cool-as-ice hockey players and the women heating up their lives.

Warning: The following contains spoilers from a cliffhanger in Garrett.

Rising star Zack Grantham has been stuck in a downward spiral of grief that has put his career on hold. Back on the road with the Carolina Cold Fury, still crippled by emotional baggage, and now a single dad, he’s in need of some serious help with his son. But while the nerdy new nanny wins his son’s heart, Zack isn’t sure he’s ready for a woman’s touch—even after getting a glimpse of the killer curves she’s hiding under those baggy clothes.

Kate Francis usually keeps men like Zack at a distance. Though his athlete’s body is honed to perfection, he refuses to move on with his life—and besides, he’s her boss. Still, the sparks between them are undeniable, tempting Kate to turn their professional relationship into a personal one. But before she makes a power play for Zack’s wounded heart, Kate will have to open him up again and show him that love is worth the fight.