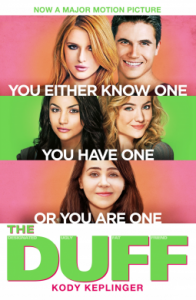 The DUFF is about Bianca Piper – one of the boys at school, Wesley, whom Bianca HATES tells her that she is the “Duff” or the “Designated Ugly Fat Friend” of her friends group. Bianca isn’t too happy with this piece of information but has some other things going on at home that at the moment are more important. Her Mom hasn’t been home in months, she works as a public speaker and has been off doing whatever it is she does and her Dad is not happy about it.  Then her best friend’s brother is coming to town – the brother who used Bianca to cheat on his girlfriend who is now his fiance.  And her best friend Jessica doesn’t know anything about it.  In an effort to avoid Jessica while her brother Jake is in town – she ends up spending a lot of time with, of all people, Wesley!

On Valentine’s Day she finds out that her parents are getting a divorce and spends the day sorting valentine’s with her crush of 3 years, Toby.  But Bianca just keeps hooking up with Wesley.  That is until Toby asks her out on a date.  The two are dating and things seem to be going well when Wesley walks in on them because he wants to know how Bianca has been doing because she has been avoiding his calls.  She realizes that she may have feelings for Wesley after all and he may have feelings for her too!

This book is being made into a major motion picture, but from what I hear they have added in some characters and changed the plot up a bit.  It will be interesting to see the movie and see how it matches up to the book, which I really enjoyed reading.

I received an e-copy of this book in exchange for an honest review.

Seventeen-year-old Bianca Piper may not be the prettiest girl in her high school, but she has a loyal group of friends, biting wit, and a spot-on BS detector. She’s also way too smart to fall for the charms of a man-slut and slimy school hottie Wesley Rush, who calls Bianca the Duff – the designated ugly fat friend – of her crew.

But things aren’t so great at home and Bianca, desperate for a distraction, ends up kissing Wesley. Worse, she likes it. Eager for escape, Bianca throws herself into a secret enemies-with-benefits relationship with him.

Until it all goes horribly wrong. It turns out Wesley isn’t such a bad listener, and his life is pretty screwed up, too. Suddenly Bianca realizes with absolute horror that she’s falling for the guy she thought she hated more than anyone.

With a wry and tell-it-like-it-is voice, New York Times Bestselling novel The DUFF is a witty and poignant story of a teenager struggling with the rules of high school attraction, along with the breaking down of her relationships with family and friends. It is a novel about what it means to be sexy, in a world where we feel we have to be perfect!