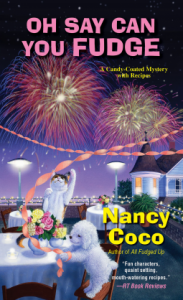 Oh Say Can You Fudge is the 3rd book in a series. I haven’t read the other two in the book but didn’t have any problem following along. They do sometimes reference things that had happened in the past, but nothing that would leave you confused with what is going on in the story.

Allie McMurphy is in charge of the Fireworks for the 4th of July on the island.  While she is making fudge, her phone rings.  Since she is in the middle of making it she doesn’t bother to answer. She listens to 2 of the 3 messages on her phone and realizes that there is a fireworks emergency and the technician had called her from the warehouse where they are storing the fireworks.

She arrives to find him possibly dead and then the warehouse explodes. Allie has a bit of a reputation of finding dead bodies and trouble and she doesn’t do much to shake that reputation in this book.  She and her dog Marshmallow (Mal for short) seem to keep finding local fires and it seems the island has an arsonist on its hands.  After the fireworks, Mal runs off and Allie’s boyfriend Trent ends up finding a trip wire for what appears to be a bomb.  Allie tries to help figure out who is causing the fires with some of her friends and it ends up getting her in even more trouble… but just what kind of trouble you’ll have to read to find out!

I really liked this book – it included recipes which is always a fun perk and it was a fun read. Allie was a likeable character and you couldn’t help but root for her and hope that she could figure out what was going on on the island before the fires got out of hand. I loved reading about the island and all the people who lives there and the fudgies who visited!

I received an e-copy to read in order to write this review. I was not otherwise compensated.

Allie McMurphy is busy making yummy fudge for the summer holiday–until murder gives her something else to chew on. . .

It’s not Fourth of July on Mackinac Island without fireworks and fudge. The Historic McMurphy Hotel and Fudge Shop is supplying the treats–and Allie has hired Rodney Rivers, the biggest name in aerial displays, to create an unforgettable spectacle. Unfortunately, Allie finds him dead, covered with screaming chicken fireworks, just before the entire warehouse of pyrotechnics goes up in smoke. Is it arson or is it murder? Allie and her bichonpoo, Mal, must sift through the suspects until the killer is caught and the island can enjoy a star-spangled celebration.