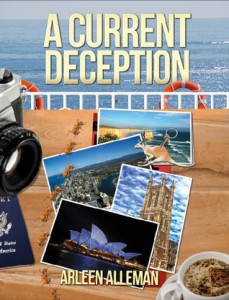 A Current Deception is a mystery novel that revolves around Darcy. Darcy is a free lance reporter and is currently on a cruise in Australia with some friends who are getting married. The first day on the cruise, one of the guests is attacked by crazy ants. A couple days later his wife seems to have gotten food poisoning. A couple days after that a passenger is dead. The head of security doesn’t seem to be doing anything about it and Darcy finds herself almost right in the middle of it all, as the head of security doesn’t seem to be doing a great job investigating so she does some digging of her own.

There are a lot of characters in this book and since there are other Darcy novels some mentions to previous events. I didn’t have a problem with the previous events being mentioned as there did seem to be enough background to follow, but at first I did have trouble sorting out the who was who of all the characters.  The book moves fast and bounces from characters each chapter. Although Darcy is mostly the narrater, we sometimes are told about things going on when she is not around which made things a bit confusing at times as well.

I thought I knew “whodunit” rather early on, but there seemed to be more and more suspicious people being mentioned. I should have just stuck with my gut though because in the end, I was right.

I did really enjoy this book, I love a good mystery, and I will have to see about reading some of the other Darcy novels.

A Current Deception is a fast-paced compelling mystery adventure with tidbits of history, geography, and science. Darcy Farthing is a freelance reporter with strong opinions and convictions based on her science background and humanist outlook. In this novel she joins husband Mick Clayton who is a government investigator, and other family members and friends for a relaxing honeymoon and wedding cruise around Australia. From day one drama and trauma invade their vacation.

A mysterious infestation of yellow crazy ants and a food-borne pathogen inexplicably plague an innocent small town Kansas woman. Before long, the ants injure other passengers and crew, shipboard violence escalates, and a passenger dies under mysterious circumstances on an Adelaide street corner. The ship’s security chief names Darcy’s friend and ex-husband as the sole suspect when evidence is found in his cabin. This propels her into the investigation and soon she implicates an elusive crew member who seems to have disappeared. Attacks continue as the ship races toward its final port. Clue-by-clue, in a suspenseful conclusion Darcy identifies a world class computer hacker and master of disguise intent on carrying out a murderous twenty-year vendetta.