Book Review: One Creepy Street The Spider on the Web

June 7, 2015 by ConcertKatie No Comments 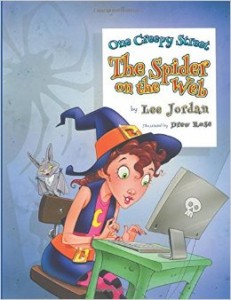 7One Creepy Street, The Spider on the Web is a story about a young witch named Annica who liked to play games and watch videos on the web.  She meets a spider and they begin chatting. She sends him photos of herself and thinks that she doesn’t have to worry when they decide to meet up. Except that the spider is not who she thinks and he is just out looking for prey! Fortunately this story doesn’t have a bad ending – but that doesn’t mean that they all end up that way.

This is a cute book with some really great illustrations to help teach kids about the dangers of the internet and people they may meet and to exercise caution if deciding to meet up with them. (Like let their Mom know / come along.)  I liked that they made the spiders the villain because I hate spiders and it made the book that much more creepy to me!

The internet is a terrifying place, with online predators, cyberbullies, and identity thieves lurking in every corner—and it’s laced with lots of young prey. When children use the web without supervision, they are exposed to a wide range of frightening situations.  Now, one father is on a mission to keep our kids safe by using a language they can understand—a cautionary short story with a rhythm and a purpose.

Jordan’s new campaign is a fresh take on internet safety. In One Creepy Street: Spider on the Web, he dives into the dangers of online games, social networking, and other seemingly harmless communications. Readers are thrust into the tangled web of an online predator who prowls the internet, targeting children and using games to lure in his unsuspecting victims.

Spider on the Web is a whimsically illustrated story that not only appeals to children of all ages but also teaches valuable lessons such as: