Book Review: You Couldn’t Make It Up! 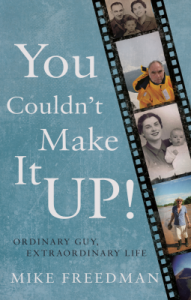 You Couldn’t Make It Up is the autobiography & memoir of Mike Freedman – it talks about his life and travels, among other things – but isn’t in chronological order (other than his early years – which ARE in order, it doesn’t really matter.)  The chapters are made up of several shorter stories, which I liked because I found things easier to read with it all broken up like that.  Some of his travel stories included being detained in Canada for “taking a job from canadians” and searched in Canada for staying only for dinner – only for them to not find anything other than what he said in his luggage.  A lot of the stories, after reading them, you think – “You couldn’t make this up!” hence the name of the book.  Oh and did I mention he even got bitten by a tarantula once? *shudders*

Mike has held a lot of different and interesting jobs, and has a lot of stories about it all. As the write up says – it is an amusing and fast read – it is written like Mike is telling you the stories more conversational than anything else – which I find helps me to get through books faster.

Definitely an interesting read worth taking the time out to check out!

I received a free e-copy of this book in exchange for this honest review.

Believing life is not a rehearsal, and with the world at his feet, Mike took it full on!

How many people can say they’ve survived a tarantula bite, been deported from Iran, explored the wilderness in Antarctica, and served on a Foreign Office Commission? Mike Freedman can.

You Couldn’t Make It Up! is his memoir, spanning 70 years, that details his extraordinary experiences. Having been on a plane halfway across the Atlantic during 9/11, as well as exploring the Malaysian jungle and Namibian desert and running marathons, Mike tells of how he is lucky to have had such an array of exciting and scary experiences. Despite having been expelled from school, Mike has received degrees from University College London, Oxford, University of the Arts, London, and Saskatchewan in Canada. His life is littered with unusual events and unbelievable escapes that show just how you can make your own luck.

An amusing and fast read, written in a chatty and friendly style, You Couldn’t Make It Up! will appeal to anyone of an adventurous nature, while serving as an inspiration to the younger generation and providing a reminder to the older of a golden time. In addition to Mike’s many adventures, You Couldn’t Make It Up! also details his moral and political values, adding a serious facet to the book.

“I wanted to leave my story as a legacy to my children and grandchildren,” says Mike, who classes himself as a wilderness adventurer as well as being a husband, father and grandfather. He had a successful international business career and parallel political one. Mike is now an artist.