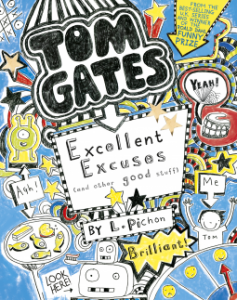 Tom Gates is back in Book #2. I haven’t read Book #1 but that’s ok.  Tom Gates is in Middle School and this is his diary.  I found that he puts a LOT of effort into the book, drawing letters bigger than others, drawing pictures and doodling – but comes up with all sorts of excuses when it comes to homework.  If he put half as much effort into his homework as he does his book – well, I guess there’d be no reason to have a book then, would there?  Tom is in a band called DOGZOMBIES and they are getting ready to have their first gig, after they find a drummer, of course.  Then one day Tom realizes he has a toothache but tries to hide the fact that it kept him up all night by blaming the scary movie he watched instead because he didn’t want to have to give up sweets.  Tom also can’t stand his sister Delia and the band’s one song is “Delia is a Weirdo”

This was a fun read, mostly due to the way that Tom wrote the book with all the drawings and doodles.  A great Children’s read.

No school for two whole weeks! Now Tom has plenty of time for the good stuff, like finding new ways (so many!) to annoy his big sister, Delia. Or watching TV and eating caramel candy. Or most important, band practice for DOGZOMBIES in his best friend Derek’s garage (while not encouraging Derek’s ’60s-music-crazed dad). All that stands between this band and rock greatness is, well, a song (besides “Delia’s a Weirdo”). And finding a drummer. And landing a gig. Will Tom let a killer toothache and pesky overdue homework get in his way?