June 2, 2015 by ConcertKatie No Comments 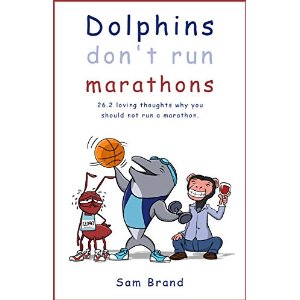 Dolphins Don’t Run Marathons is 26.2 loving thoughts on why you should not run a marathon. It breaks down humans into human ants, human chimps and human dolphins and how all three relate to running. The book then tells you what is more important than running, like being happy in your heart and looking for adventures other than running. There are also tips for running the New York Marathon. It’s a cute idea and I like the comparison between humans and animals. I think I’m a chimp because I am not athletic and can probably be considered lazy.

I am trapped in the marathon world.

Help!! I cannot find any way to escape the marathon jungle world.

Stop being a case study in the runner’s world.

Dolphins Don’t Run Marathons will lead you towards a new direction so you will be able to find a way to escape from the world of marathons and move on to a new, positive sporting life.

Sam Brand thinks that the peak of the marathons may have been reached. Dolphins Don’t Run Marathons will show you the way to reinvent yourself, to become a new you, with the 26.2 loving thoughts that will change your running world.

You can shape your world, become a dolphin, all other animals are already taken.