Book Review: Heart of the Game 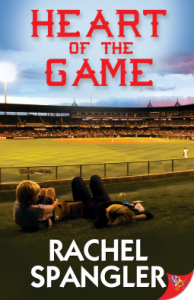 Heart of the Game is a baseball romance novel, but it is unique because it is a romance between two women which really is not typical of books where baseball is involved.  Sarah Duke has just become a full-time sports reporter for the biggest website in the major leagues. She loves her job and she loves baseball and she loves that she is one of the only few women who have such a job.  Then one day she meets a young boy who is as into the game as she is.  She talks to him about the game but when she offers to take him to the bullpen his Mom is not happy that she was going to take off with him without asking permission.  Sarah, or Duke as she is called throughout the book, apologizes profusely and ends up forging a friendship with this boy, Joe, his little brother Charlie and his mom, Molly.  She wants to be friends with the boys and talk baseball with Joe and keep him in love with the game, so she offers to babysit while Molly goes on a date with a woman named Lauren that had been pursuing her.  Once things go south there, Molly and Duke end up having a bit of a thing – but it’s hard for Duke to balance her love of baseball and her love of the job with Molly, the boys and their schedules.

I enjoyed this book, but I really didn’t like the character of Molly.  She liked you to think that she was in control, but when she lost control then it was everyone’s fault but her own.  I also felt like a lot of the time she couldn’t make up her mind as to what she wanted (especially when it came to Duke) and she would agree to things in the moment and then as soon as things went south it was all Duke’s fault and they shouldn’t be together, blah blah blah.

Sometimes baseball is just a metaphor for life, and sometimes it works the other way around.
All Sarah Duke ever cared about was baseball, and she’s finally earned her shot as a full-time sports writer. She loves the work, she loves being one of the few women to ever gain access to a man’s world, but most of all, she loves the game. When Duke meets Molly Grettano and her two sons at the ballpark, she instantly connects with the young family, but Molly isn’t sure Duke’s ready for something more. Molly wants someone softer, more feminine, and more importantly, someone steady. She and her boys have been abandoned before, and she’s vowed to never to put them in that position again. If she were ever to trust anyone, it would have to be someone fully dedicated to her and her children. Duke has a lot of heart, but neither woman is sure there’s enough room left in it for anything other than baseball.

« Previous post
Book Review: If You’re Not The One
Next post »
Book Review: Tom Gates: Excellent Excuses (and Other Good Stuff)