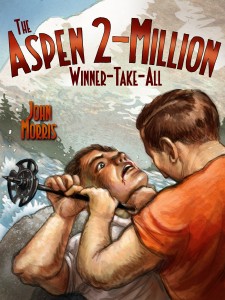 What a roller coaster this book was!  The Aspen 2-Million Winner-Take-All by John Morris is about a guy named Morgan who is living in Aspen, CO.  He recently sold the other side of his duplex to a pretty neighbor named Risa.  Things seemed to be going alright, they never really talked to each other much, until Risa’s dog Tyson goes missing.  Morgan finds out that while he was out of town, a pot fell off his balcony and landed on poor Tyson.  He ends up finding the dead, frozen dog and he and Risa get in a fight where “what are you gonna do? Sue me?” comes out of Morgan’s mouth.

Well, Risa decides to take him up on this and sues him for ONE. MILLION. DOLLARS. for killing her dog. Something that happened when he wasn’t even in  the state!  Fortunately (or unfortunately) for Morgan, his best friend Justin is a lawyer.  This should be easy, right? WRONG.

Morgan and Justin come up with 3 ways for Morgan to get out of this.  Find one of Risa’s deep dark secrets and blackmail her into dropping the lawsuit.  Get the $$ to pay her if he loses.  This seems impossible until a 2 million dollar winner takes all golf tournament in Aspen shows up on Morgan’s radar.  And finally… get Risa to fall in love with him and drop the lawsuit.

Meanwhile, Morgan’s ex-girlfriend Mandie seems to accomplish option #1 – but every time she tries to tell Morgan that she knows something, Morgan wants nothing to do with her.   Morgan starts on options 1 and 2, but every time it seems like Risa is falling for him – something happens and she ends up flipping out on him. (I am pretty sure she was PMSing for the several months this book took place during. She seriously went nutso a bit too often on poor Morgan!)

A bunch of liars and cheats show up to play in this 64 man golf tournament.  It is on the local course so Morgan thinks that he will do ok, but he’s up against a bunch of shady characters.  The shadiest being Robbie the Creep – Risa’s cousin!  The tournment is being done by Hap Daughtry, whos daughter Emmie is sick and in and out of hospitals.  Hap has Morgan added to his bank account to help with the finances – but the money that should be there is not.  Where is Hap hiding it? What else is Hap hiding? And why does Emmie keep saying she wants to go to see her momma – who has been dead for 5 years?

The book ends in a CRAZY cliffhanger and as much as I’d love to give it all away right now – I won’t – because you really need to read it for yourself to truly enjoy the ride that is The Aspen 2-Million Winner-Take-All.

As crazy as this book was, I loved reading it.  I also loved how the author used parenthesis for notes in the story.  I used to love to do this (well, I guess I still do), but got in trouble for doing it all the time in school.  Now I know, if I want to write books it is totally ok to do it again because there is no teacher to yell at me about it… The author also notes what celebrity each of the characters looked like.  Although I kind of ignored this and made up my own appearances for them. I don’t know why.  But for those of you who want some guidance in figuring out who to picture when reading the book – it will be made pretty easy for you!

I definitely recommend this book – it would be a fun summer read since it is set in Colorado and snow and skiing are mentioned a lot – might make you feel a bit cooler in the summer heat!

I received a free e-copy of this book in order to participate in this Blog Tour! I was not otherwise compensated and all opinions are my own.

Morgan thought he had it made. He owned a cozy if dilapidated house in Aspen’s otherwise fashionable West End, had lost of friends, a great business and threw the best parties in town.

Then his beautiful-but-aloof neighbor Risa sued him for a million bucks– for killing her dog. (Seriously. And he hadn’t even been there.) She was asking the judge to throw him out of town, too. (It’s a local tradition.)

For Morgan, the money didn’t matter. He didn’t have a nickel to his name. But he couldn’t imagine not living in Aspen.

His only hope: to win a 2-million dollar golf tournament (held on the sly at the local links) and pay Risa off.

Either that or discover her deep, dark secret and blackmail her.

Until his best friend/lawyer suggested Option #3: “Why don’t you just get her to fall in love with you?”

John Morris lives in Aspen, Colorado, with his loving wife and two wonderful children. Having worked many of the same cowboy / construction / bartender / ski-patrol jobs as his fictional counterpart Morgan, he can couch for how easy it is for a good-looking guy to get in trouble there.