November 1, 2011 by ConcertKatie No Comments 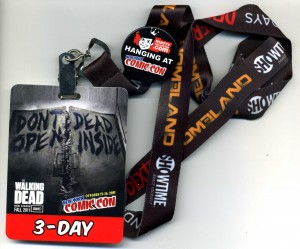 A couple of weeks ago a few of the local radio stations were giving away 3-Day passes to the New York Comic Con.  After the fail that was the Wizarding World Comic Con in May, I figured it would be worth a shot to see one that may be just a little bit more organized (and in a much bigger venue).   I bid all my points on one of the auctions, but unfortunately did not have enough points to ultimately pull out a win.  However, I was pleasantly surprised that afternoon when someone from the station called me and said that since they “had a bunch of passes” they were giving me a pair since I came in second on the auction!

Unfortunately I wasn’t able to attend all 3 days, but my brother and I did make the trek there on Saturday.  There is no easy way to get to the Javits center but we took the train in to Grand Central, took the S to Times Square, then walked what seemed like a mile and a half to the C train… then went from Penn Station / Madison Square Garden on 8th Ave up to 11th ave.  By the time we got there I was exhausted and knew that we would absolutely be cabbing it back. (When we got home we realized they had a SHUTTLE from Grand Central! Except we had seen no info about it on the website ahead of time)

We ended up spending about 3 hours walking around and it was really overwhelming.  Fortunately we had a list of a few things we wanted to buy / check out and figured out what locations they were at and managed to get all on our list. (Except for one item which I am pretty sure my brother made up. lol)  We also stumbled upon the Oscar the Grouch muppet from Sesame Street so of course I HAD to get a photo with him!

Also before we headed to the concourse I saw a boy at a booth – he looked familiar. He smiled at me, I smiled back but for the life of me couldn’t remember who he was. I thought he was Derek from Degrassi.  Got home, looked him up, sure enough it was!  I probably should have talked to him because no one was at the booth – but I didn’t want to walk up to him and be like “Ok so you look REALLY familiar to me, but who the heck are you?”

After leaving the floor we head over to the Autograph area. At first I was all excited to possibly meet Mark Hamill, but then realized that his autograph would have cost me $100 – which was all I brought to begin with and was certainly NOT what I had left on me at that point!  I spotted Jewel Staite who I recognized from being on ONE episode of 2gether.  She had also been on a Disney show I used to watch and a bunch of other shows I’ve watched here and there so I opted to go and meet her.  Hey, if I can’t meet QT because he has passed away – the next best thing would be to meet everyone he interacted with on the show – right? right.  She was really sweet and signed an auto for me, shook my hand and briefly chatted. (I didn’t tell her that I really wanted to meet her because she was on one episode of 2gether though lol) 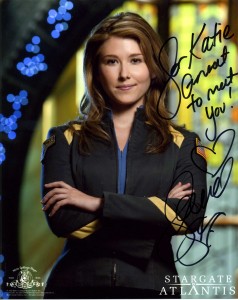 After that we opted to hail a cab and head home.  The floors were crowded (as to be expected), I was exhausted from the moment we stepped in the door… and I almost lost my shoe no less than 5 times by guys stepping on me.   I’m sure there was a TON that we missed, but I’m not really sure how to attend in a more organized manner.  Just walk up and down every aisle, I guess! (Which easily could have taken all day!)