November 17, 2011 by ConcertKatie No Comments 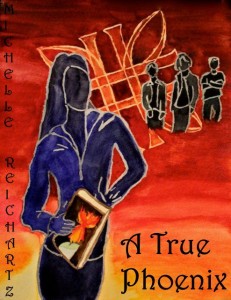 A True Phoenix is by up and coming author Michelle Reichartz.  It tells the story of Lexi who is a bit of a book worm and appropriately enough, works at a bookstore.  When she has a bit of an altercation with her boss, she ends up in a foreign place she’s never seen before – the home of her favorite band!  The 3 members of the band, Kip, Jordan and Shep, all help her work through her struggles that she has had since childhood – her parents divorce, being picked on at school, being placed in the home of her Aunt because her mother couldn’t care for her, and ultimately what happened with her boss.  As she leaves them to go back home, she hears a song playing… one that she had never heard before.  Would she ever end up hearing it again?

The day I chose to read this book I was incredibly tired because I was up a bit too late the night before.  My plan was to read half of the book before I was able to get some sleep in and then finish the rest at a later time.  However, I could not stop reading this book and I needed to know how and why she ended up with her favorite band – and how they knew so darn much about her situation!  Was she dreaming? What was going on!  So I powered through and read the whole thing in one go because I needed answers!

I won’t give away what happened – because obviously I want you all to check out the book – it comes out TODAY!  But I was quite pleased with the ending, perhaps a little shocked and surprised too.  I think you all will enjoy this book and I urge you to help out independent authors like Michelle in helping her make her dreams come true!  The book is available for purchase at http://schulerbooks.com/

Most of them are dismissed as a passing experience; forgotten, never to be
thought of again. Then there are those things we encounter that change the
course of our lives. It may be as simple as a painting, a book, or a piece of
music.

But for Lexi Matthews, that event was something far more tragic.
Something she would much rather forget. For as long as she can remember; her
life has been nothing but struggles, each one seemingly more painful than the
last. As she bounces from painful moment to painful moment, the only constants
present in her life to cushion their blows are her best friend Zander, her job, and
her favorite band; Phoenix Rising. Her day to day life had become defined by
her routine; a never ending vicious cycle, and a constant search for the peace
missing in her life.


Then one day the tragic moment she never saw coming finally came.
Lexi is brutally raped by her boss. In the midst of this Earth-shattering series of
events, she finds herself thrown from the world she knows and into the presence
of Phoenix Rising. Thrown from her world and into theirs, Lexi would be forced
to examine each and every piece of who she thinks she is or what she thinks
is her life. During their time together; she would transcend the boundary set
in place by the stage and discover each band member’s own similarly painful
and tragic moment. With their help she would be forced to confront not only
this moment, but also the deepest and darkest of her secrets. With hers, three
friends in turmoil would find friendship again. Together they would unite against
their darkest demons and discover the path to true happiness.

Michelle Reichartz was born in West Allis, WI. At a very early age, her passion for reading developed into a passion to write, and she has been writing ever since. After graduating from Cornerstone University in Grand Rapids, MI she returned home and quickly set about taking her passion for the written word to the next level. With the completion of her first novel coming quickly, her promise as an up and coming young author soon became evident.