October 5, 2011 by ConcertKatie No Comments 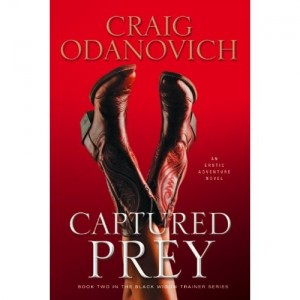 In September, I reviewed The Black Widow Trainer, the first book in the Black Widow Series by Craig Odanovich.  This month I review the second in the series, Captured Prey.

Since we left Misty, her divorce from her husband has been finalized and she has been hanging out in Argentina with Gabriella.

She lets Gaby pick her next client and it turns out to be a beady eyed man that Misty is not in the least bit attractive to, however, she has a contract that she must stick to to be paid, so she tries to put the fact that she is not attracted to this client aside.  While in Texas, she falls for the client’s ranch’s foreman – when her client finds out he tries to put a stop to it.

As always with Misty, there is a lot of drama and eventually the contract is broken by the client (thanks to his wife who was looking for a reason to divorce him that would be his fault so she would get more than her pre-nup)

After her client in Texas, she takes a client in Washington DC that is a congressman.  Of course, there is more drama when the woman running against the congressman tries to bring him and Misty down with the help of her client in Texas!  One of Misty’s past clients comes to the rescue – BIG TIME! And saves Misty (and all her friends) butts.   Her bodyguard, Miguel, seems to be out of commission for a while after recovering from an altercation with some burglars who were looking for dirt on Misty for the congresswoman.

The book sets up for the possibility that Misty may retire from her profession… or not!  She is in love with the foreman from Texas – but of course not without some drama there as well.  Will their relationship last and have her leave her job as the black widow trainer? Or will she try to work out a deal with him like she did with her now ex-husband?

Unfortunately the 3rd book does not look like it will be released until March next year, but there is an excerpt at the end of the book and it sounds like a familiar face from Book #1 returns…