An Inconceivable Evening with Cary Elwes

December 8, 2022 by ConcertKatie No Comments

Growing up, I must’ve watched Robin Hood Men in Tights 100 times.  When I was a bit older I found The Princess Bride.  I always thought Cary Elwes was sooo cute.  We had tried to meet him at a con a couple of times, but he always ended up canceling.  When I saw he was coming to Oakdale for a screening of The Princess Bridge and Q&A, I immediately jumped on buying tickets.  When I saw a VIP M&G add on was an option, I didn’t hesitate to add it to my cart.  Though since he had canceled on me before, I was nervous he was going to again – even until I was in my seat that night (especially when there was a delay getting us into the theater).

The evening started with a screening of The Princess Bride.  I am *not* a movie goer – everyone laughing and talking is just not my thing, but this movie is so quotable, it was kind of cool when the whole room yelled out some of the more memorable lines.  After the movie, Vinnie Penn introduced Cary who came out and did a Q&A for an hour.  He did all the voices of anyone he was talking about talking and was just fantastic.

Then it was time to line up for the M&G. Being on my own, I knew I couldn’t stand in the line and I asked for a chair.  Unfortunately this ended up meaning I was going to be one of the last one through the lines as they had no ADA accommodations figured out beyond giving me a chair.  The Q&A ended at around 10pm, the M&G started sometime after that and I was making it through the line at about 12:20am.  ZzzZzzZzzz.  When I made it in to see Cary he immediately asked me why I was one of the last ones!  I said it was because I needed to sit and he said I still shouldn’t have been last.  He said I was “adorable” and “god bless you” multiple times, then grabbed my arm and walked me over to the partition for the photos.  We took the photo and he came back over and gave me a huge hug and whispered “as you wish” in my ear.  All the anger about having to wait to be last went POOF.  He also asked to make sure that I was ok getting back to my car.  Of course, now the staff fell all over themselves to help me.  Too bad that wasn’t something they thought of on their own earlier…

I found it funny that we had a partition for the photo, but he was touching and hugging everyone anyway (I assume I wasn’t a special case) and they edited the partition out before sending us the photos but they didn’t bother to edit us standing a bit closer together! (I took that into my own hands and edited it myself.) 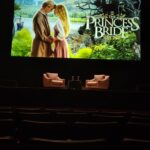 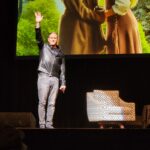 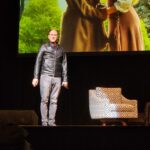 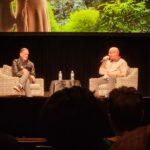 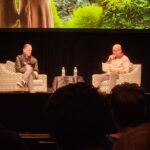 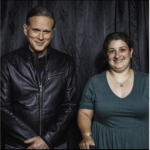