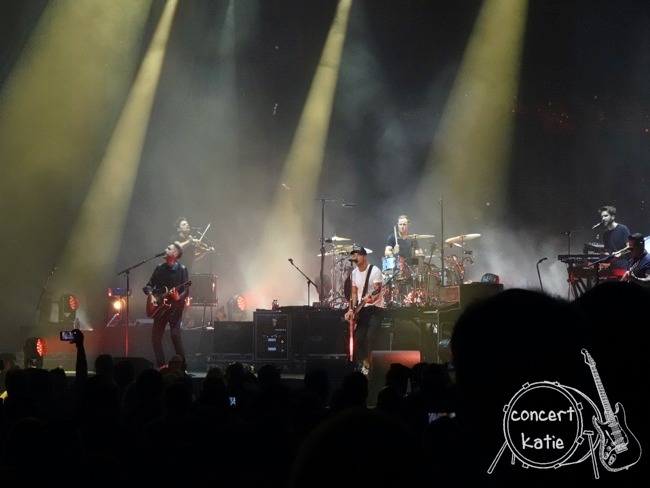 When I was first heading to this concert, I was pretty excited because for the first time in a long time I actually wanted to see ALL the acts.  Since actually going to the show, my position on that has changed and I was not wowed by One Republic at all.  I couldn’t remember if I had seen them before, but when Ryan mentioned during his set he had family from Mystic, that seemed vaguely familiar. But looking at my stats I have seen them THREE times before.  Clearly, all shows were quite memorable. 😉 [For those keeping score – it was Q102 Jingle Ball 2012, Mixtape Festival 2013, and All Star Music 2016 – so it had been quite a while.]

Initially I had thought that the show was going to start at 8 like NKOTB did earlier this month, but double checking both tickets – NKOTB said 8 and One Republic said 7 (Good thing I screen capped since the e-tix go POOF after the show) so I raced to get up there earlier than intended because John K had been announced as the first opening act just a week or so ago.  For those of you who don’t know who he is – he was my absolute obsession from American Idol Season 11 and was robbed and didn’t even make it past I think the Top 24. Back then, he went by Johnny Keysar.  I’ve been following him on social media ever since, he has rebranded as “John K” and in March 2020 was supposed to do a radio station thing in CT that I managed to win my way in to.  The show was set for March 11 and ended up being my first cancelation of many.  He ended up taking the stage at 6:55 to a nearly empty arena, though people did start filling in and seemed to be receptive to him as his set went on.  I found it amusing he kept talking about playing “new music” when there was maybe a handful of us in there who had any idea who he was.

Next up was NEEDTOBREATHE and it was my second time seeing them. They don’t seem to hit up CT all that often, so I was pumped when they were announced with this tour and their set did not disappoint. Despite their set time being much shorter than that of the headliners, they managed to squeeze in 11 songs to One Republic’s 16. They put up a QR code that would pick one lucky person to go backstage after their set, but unfortunately I was not the winner.  I did see Seth walking around after the show though!

Edit this setlist | More NEEDTOBREATHE setlists
Then it was time for One Republic.  Once everyone stood, I couldn’t see from my spot (which usually is not the case but I realized they had 2 extra rows out they usually do not have when I’ve been in that spot in the past) so I stood for the first couple of songs but just wasn’t really feeling it.  Then Ryan made a crack about there being 3-4 people in the crowd who didn’t realize they didn’t buy tickets to a One Direction concert and also they’re surprised because 1D didn’t have that many hits.  Low blow and I am not into disses of boybands and never have been so he kind of totally lost me with that.  Let your music speak for yourself, no need to put anyone else down in the process.  He then commented that 99% of us would know 99% of the songs by the end – because they did a short 16 song set that was entirely just singles – including a chunk in the middle where he just sang snippets of songs that he had written with/for others. [Halo and Sucker were more so in their entirety but Bleeding love through Rumor Has It I would consider a ‘medley’ and That’s what I want was a snippet and he also did a bit of Beer Can’t Fix.] If I was actually a big fan of the band, this setlist would absolutely have enraged me, as a casual, it was fine because I was able to sing along with whatever I wanted to, but dang.  In the elevator after the show I was with a few ladies who were discussing that the vibe seemed off from the other 2 shows they had done and mentioned that maybe it was because the other shows were outside and this one was inside or maybe because it was at the casino and a lot of the high rollers get good seats so it threw the vibe off.  I was kind of glad that these women who probably were big fans if they did several shows also kind of felt ‘meh’ about the show and it wasn’t just me being old and cranky!

Edit this setlist | More OneRepublic setlists
One cool thing that One Republic did was before the show they had a QR code to get free photos from the show.  The morning after the show I was sent a link to a gallery that had about 10 photos from the night. I can download them for free but there also is a variety of merch that can be ordered as well like gallery prints, small 4×6 prints, hoodies and t-shirts!  If the smaller prints had the band name and show date/info on it like the more expensive gallery prints did, I probably would have ended up buying one for my scrapbook. ($7 for a 4×6 is a bit steep when there’s nothing overly special about it.)
Overall it was a fun, but exhausting night!  But please, please, please can people stop with the stopping short in the middle of walkways because they don’t know where they are going at the casino?  I hadn’t been there in a while myself, but pull off to the side if you need to figure out what is going on. As someone who often CAN’T stop short, you doing it right in front of me is super dangerous and my anxiety has been in absolute hyperdrive the last 3 shows I have gone to at the casino solo because I need to be completely aware of *everyone* around me and what they may or may not do next, when even they don’t have clue. Thank for coming to my CP Ted Talk.