August 4, 2022 by ConcertKatie No Comments 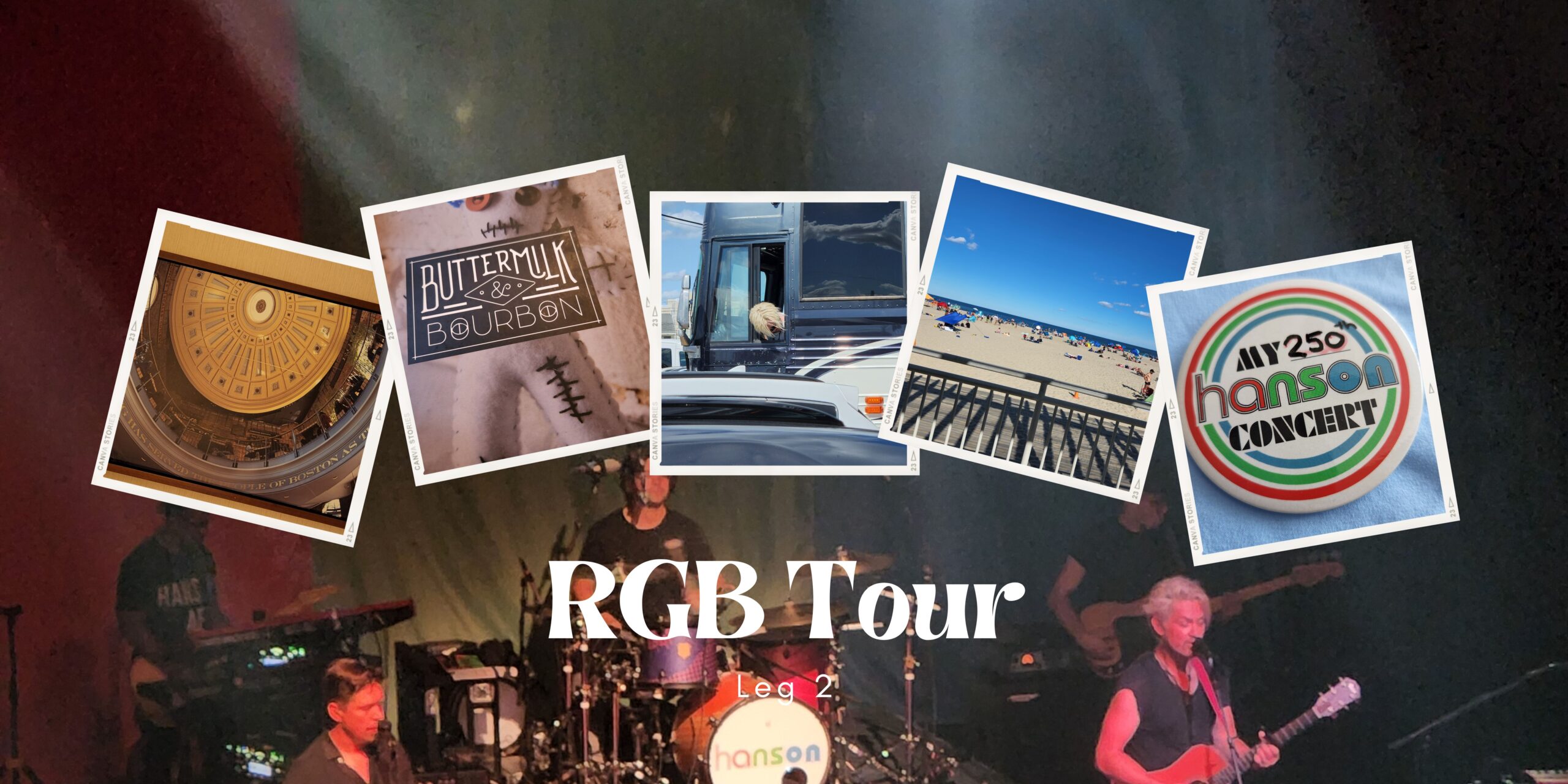 For the second leg of the RGB Tour we were more on my home turf, New England and NYC.  This series of shows also had a couple of milestones.  The Hampton Beach show was my 700th concert overall and the NYC show was my 250th Hanson show.  This was extra special because back in 1997, the radio stations were giving away tickets to an exclusive Hanson show at the Beacon Theater in NYC.  I tried and tried and tried to win these tickets, but in the end, didn’t end up being successful.  At the time, I didn’t think to “just show up” and see if I could get in that way and taking trips to NYC wasn’t a common thing with my family at this time.  That Beacon Theater show ended up being used throughout Hanson’s tour VHS, Tulsa, Tokyo and the Middle of Nowhere.  I ended up going to the Beacon several other times over the years – to see Penn & Teller, front row to see The Wanted and even seeing Hanson as part of their String Theory tour.  But I feel like after 25 years I was finally righting a wrong, as I had front row seats to see a proper Hanson show there.

But let’s start with Boston…

Initially I wasn’t going to Boston, it can be difficult for me to get to and the venue is across the street from Fenway Park and the Red Sox also had a game the night of the show.  I also had tickets to see Shawn Mendes, so I was going to skip and meet up with my friends in New Hampshire instead.  Then Shawn ended up postponing and then canceling his tour and when I looked for tickets there was a front row box seat still available so I crashed on my friend’s plans.  I was going to pick my friend up at the airport and then she was going to drive my car in to Boston – but Thursday afternoon we got word that her flight was delayed into the evening, so I was on my own with getting to Boston.  Fortunately I only had to drive about 5 feet into the city before getting into the parking garage at the Prudential Center.

Due to rain supposed to be coming in, we changed our dinner plans and went to Earl’s in the Prudential Center for dinner and spent about $200 between 3 of us.  Here I thought being home for part of this leg it would be the less expensive run!  The next day we did our original dinner plans for lunch at Buttermilk and Bourbon which is a New Orleans inspired Tapas experience.  We had a lot of delicious food to share.  When we left the venue, we tried to get a Lyft to go the mile or so up to the venue and it gave us like 5 different drivers (one even named Hansen) before we swapped over to Uber and finally made it as close to the venue as we could get.

A couple of nights before the Boston show the guys had debuted “Dressed in Brown Eyes” along with the opener John Calvin Abney.  Since we had 3 more shows with John we were hopeful we’d end up getting to see it and we were quite pleased that it made it as the encore in Boston.  We weren’t very pleased that we were now 4 for 4 with Isaac doing River and Taylor doing Save Me as solos.  We were even less pleased when a friend snapped a photo of the selist and we found out that Taylor’s solo was supposed to be “Truth” and followed by “With a Little Help From My Friends”.  We thought maybe they practiced it and it didn’t sound great and weren’t sure if that meant it would never see the light of day or if maybe it would show up later in the tour.

Overall the Boston show was a good one, but the section I was in was not into it at all. I am not sure the woman next to me even moved, which is fine, but she kept giving me looks when I was singing along and swerving my chair around to “dance”.  The vibe was just all off and almost somber.  Until…. MMMBop when a few girls somehow appeared behind me out of nowhere and in true Boston fashion, someone ended up spilling a drink on me. And then you wonder why I think Bostonians are obnoxious. They can’t drive and they literally can’t hold their liquor.  After the show the bus was pretty much chaos (and we missed seeing Zac in the bus door by about 10 seconds!) so we opted to just head back to the hotel.

Saturday morning we took it easy because we knew we had a late night drive ahead of us.  We made the drive up to Hampton Beach and the parking lot I wanted to park in said it was full, but I knew they had a few accessible parking spots which sometimes aren’t included in the count for “full” so we decided to drive in and see if we could get lucky and in fact we ended up finding an even better parking spot, with the bus right behind us.  While waiting for the rest of the crew to arrive, we saw Taylor drive his bus by and knew that he’d need to park it right behind us soon.  We ended up hanging around since we weren’t sure if my car would need to be moved to assist in the parking attempt and well, we didn’t really trust Taylor to safely drive past it either.  First Taylor came and assessed the situation and then pulled the bus in.  There were shouts of “WATCH THE RED CAR” and then some locals came by and finished directing him. When he was finished and we were all pretty impressed he said “You either do it, or you do it” I mean, yeah, I guess there wasn’t really another option there.  But for 10 minutes my anxiety was through the roof watching him. He, on the other hand, appears to be fearless.

After (finally) getting a late lunch we went to sit by the beach for a bit.  When we decided to maybe hit the arcade, we ended up in line waiting to see what they would do for ADA instead  and had a view of all the line drama and the staff trying to keep everything under control.  We weren’t sure if the Casino Ballroom would even have an ADA area and weren’t expecting to see much of the show, but were surprised we had a good spot off to the side of the stage.  Of note: Isaac decided to do Hand in Hand with no fake voting, but Taylor decided to do Save Me again.

ADA ended up being a show within the show as we were interrupted during Go by a medic due to a girl looking like she might end up passing out and needing to be walked out of the crowd. (We had a barricade behind us that she had made her way up against, so she wasn’t actually in ADA.)  Another point during the night a girl came running in and plopped herself down on one of the stools. When security asked if she was ADA she said “Eighty?” and then they had to get another security guard to escort her out of the area.  Also behind the barricade near us were a couple of kids, so Isaac jumped down off the stage at the end of the show and walked along the barricade to give high fives.  The barricade ended up leading him into the ADA area and he couldn’t figure out how to get out.  After they moved the barricade for him, he waved and said thank you to us and made his way backstage.

After the show we hung out by my car and decided to see where things were at around midnight since we had a long drive back to my house after.  In the end we stayed until 12:30, all 3 guys came out and my friend helped get my CD to Zac and Taylor so I could get all 3 signatures.  (I had previously gotten Isaac in Birmingham) We also made song requests for the NYC show and felt the most confident that Zac would try to play what we asked. (The requests were World Goes Around from Zac, Greener Pastures from Isaac and Truth from Taylor – and I told him we knew it was on the setlist in Boston.)

We made it back to my house at 3:30am and ended up taking a 12 something train into the city and a cab to our hotel.  We ubered closer to to the venue to meet some friends for dinner and then made our way to the Beacon.  Unfortunately it was surrounded in scaffolding so my marquee picture dreams were crushed.  I knew this show was going to a bit emotional on several levels – one being the last time I was there front row, was for my last time seeing The Wanted.  When I saw the hallway we had to wait in before the Wanted M&G I started to cry a bit. Fortunately it was all before the show and I was able to get it out of my system.  During John Calvin Abney’s set, he leaned down and said “Miss, do you know what time it is?” so I told him it was 8:25 and he said “25? I have time for one more song!” and finished up his set.  Hanson ended up taking the stage about 10 minutes earlier than usual and the end seemed a bit rushed so I think they had a hard 11pm curfew.  While I’ve been kind of annoyed that this tour seems to skew more towards MON than RGB – all those old MON songs hit differently this night, since I remember seeing so many of them over and over and over being played here on TTMON from the video they filmed back in 1997.  I somehow managed to push myself to stand for the entire show – figuring if Taylor did Save Me again, that would be my break.  But he ended up doing Truth – which has been converted from a guitar song to a piano song – the other 2 joined him for the end of it and then they went into With a Little Help From My Friends.  I’m not sure why they decided last second to cut it in Boston because it was AWESOME.  At the end of the show, they didn’t do a bow just the 3 of them which was disappointing because they would have been right in front of me and I would have gotten a great photo!

After the show we waited by the bus but it was straight up 1997 with the fans singing MMMBop. *eye roll*.  Taylor ended up coming out and driving his bus away and we called it a night and ubered back to the hotel, only to see Zac came out about half an hour or so after we left.  But after standing for an entire show and being 3 shows deep for the weekend, I was ready to lay down.

On the train back home in the morning I was getting texts from work and needing to be on site so I have had a wild week and have been unable to sleep in like I was hoping. But the blog is finished, the work week is almost done and I have to get packed to do it all over again this weeknd.