Last weekend I made my 16th (?!) trip to Tulsa, but my first since being vaccinated.  Despite all airlines going back to filling the planes entirely (the fall concert series had open middle seats on Delta each time) there was a sense of relief knowing that I had the extra protection of being vaccinated (and I stayed masked up, as required, the entire time.)  I was a little bit nervous about my 6:45am flight as I knew I would want to sleep and wasn’t sure how sleeping in the mask would go as it didn’t go all that great on past trips, but that turned out to not be the issue so much as the very, very loud children several (?) rows behind me screaming “EIGHTY! EIGHTY! DOUBLE Q!” at 7am.  (If you’re half asleep and your name is Katie W, Eighty Double Q sounds oddly similar)  Despite being shh’ed the children didn’t really shut up or turn the volume down so sleeping turned out to not be an issue.  Upon arriving in Dallas I headed to my gate and got some Dunkin Donuts (which tasted nothing like it does in New England) and finally arrived in Tulsa after a gate change and a minor delay.

Thursday night we went to check out a Tulsa Drillers game against the Wichita Wind Surge.  Though we left before the end, the Drillers went on to win 4-2 and despite it looking like it might have gotten rained out before we arrived, it turned into a pretty nice evening. (As evidenced by the gorgeous sunset pictured above.)

This trip made for a lot more down time than the typical go-go-go of Hanson Days past. I tried to enjoy it and take it all in, because I know just around the corner I will be figuring out our schedule for a long weekend full of events and constantly asking “but, when will we eat!?”

Friday night was the 20th +1 anniversary show for Hanson’s 2nd album, This Time Around.  They did acoustic, stripped down versions of the album and played them in order in its entirety.  They did an encore of 2 of the B-Sides that were released as bonus tracks with the album.  Although there were a couple more songs I wouldn’t have minded them adding in (Bridges of Stone and I Don’t Know) it turned out to be one of my favorite shows of theirs.  After the show we hosted a few friends in our room to enjoy Taylor’s after party. (The band had videos and activities going on for fans via their website that had started on Monday night to help celebrate “Hanson Days” which was a fun way to bring everyone together) 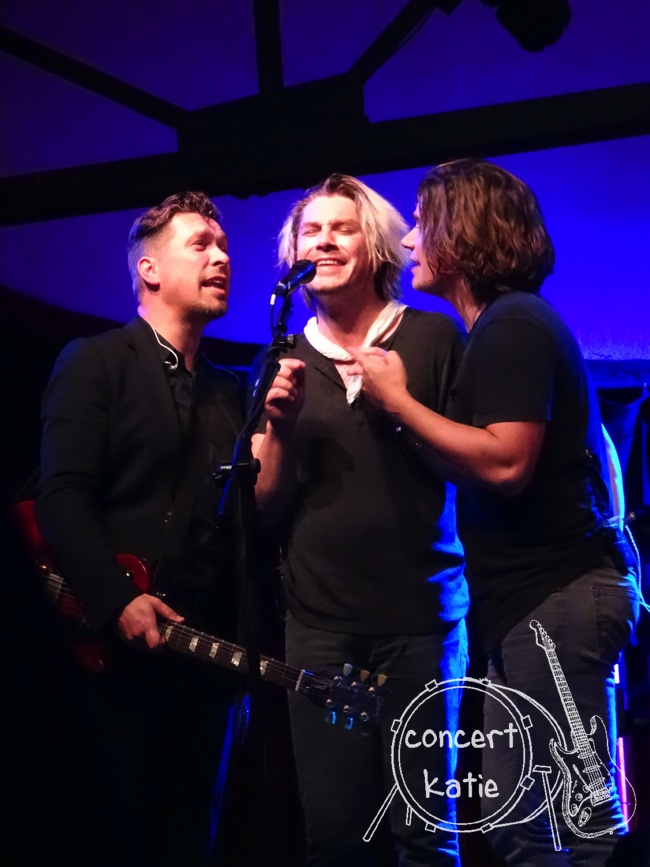 Saturday Night’s show was the “HDay Concert” and for me it was a big miss.  I know they had to do a lot of rehearsing and rearranging for the Friday night TTA show and all the activities earlier in the week, but when a Hanson Day show kicks off with Waiting For This – it ends up feeling more like an every day festival show than a special yearly celebration.  I was less than impressed with this setlist and was not quiet about that. I’m not exactly sure what I was looking for instead, but it seems like last year’s EP Continental Breakfast In Bed is going to fall into a black hole never to be heard from again and I really like a lot of those songs.  (Zac did do Good Days as his solo, at least)  I also was extremely disappointed with Taylor’s choice of a solo of With You In Your Dreams.  It wasn’t a bad show and I was happy to be there and would want to be at a mediocre Hanson Day show than anywhere else (and I know so many others could not get there and not for lack of trying) but it just fell flat for me and I feel like they were/are capable of so much more – especially after having the last year of nearly no shows – it could have been a big special celebration making up for the past year.  (Or maybe I am just a spoiled brat. I don’t know.)  It also being the last distanced table show – a set up that actually allowed me to see all 3 guys at once while seated with my friends and not shoved in a corner by myself maybe able to see one of them like it is at a typical show for me, may have also had something to do with my disappointment.  (And when I was raging after the show about how mad I was about the setlist, a friend decided to tell me that Bridges of Stone was indeed on the setlist for Friday night as an encore and they skipped it!  I was glad to find this out on Saturday instead so I had 24 hours to be happy and in love with that show before some air got let out of my balloon!)  I was also happy when we went to get drinks after the show, I was able to see some of the fireworks from the Drillers game that we had missed seeing the night before due to somewhat hiding out because of it raining.

Sunday there were a bunch of street closures for the Ironman competition.  Just thinking about swimming 2 miles, biking 112 and then running a full marathon made me tired – but there were something like 2500 athletes in Tulsa who came to do just that.  I wish I could have seen more of the race to cheer them on, but after brunch we had to make our way to the airport to head home.  And of course, after getting to Dallas and finding my gate, the gate was changed and then boarding delayed.  They were offering up $575 to several people who were willing to bump off the flight and either spend the night in Dallas or the night in Charlotte.  I would have stayed in Tulsa another night since a few of my friends were still there and I had been actively trying to change the flight but they wanted $600 from me, but I wasn’t going to jump at missing a day of work to get stuck somewhere else alone.  After a maintenance delay that delayed boarding, we were on our way.  Or so we thought.  We ended up getting back an hour later than scheduled because there was a computer issue and it would not reboot and the captains needed to get help from maintenance once again.  Fortunately after that the flight was uneventful.

There are probably a few more trips to Tulsa this year in my future… but I am looking forward to 2022 when I can TRULY say “All my friends are here, I don’t want to go home”

(PS this coming weekend is 100 years since the Tulsa Race Massacre and I am incredibly saddened and disappointed to hear that a lot of the activities have been canceled because of the threat of problems from white supremacists. It’s been 100 years and nothing has changed. We need to do better.)