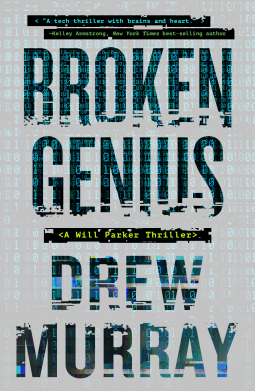 Broken Genius was my pick for my “beach read” for my trip earlier this year.  Unfortunately, cyber security grad school work got in the way of “for fun” reading time, so this book got pushed on the back burner.  But the timing ended up working out pretty nicely, as this book will be officially released next week.  Right up my alley, this book contains coding mistakes (a bit more high stakes than any I have made), cyber security and hacking as well as it all takes place at a Comic Con!

Our main character is Will Parker – a prodigy, silicon valley guy.  But when a mistake he makes with code costs a student her life and a tsunami in Japan ends up changing his plans to buy a company there he ends up finding himself working with the FBI in the Cyber Division.  When a man ends up dead at a comic con, things start to get very interesting, very quickly.  In his possession was a radioactive quantum computer – a unicorn – created by the company in Japan Will was working with but that seemed to disappear after the tsunami and its after effects.  It turns out the victim knew exactly what he had and had turned to the dark web to try and sell it.  Will this auction bring out a high profile hacker that one of Will’s FBI associates has been after for years?

This book seems to be straight forward, but it had so many twists and turns throughout (some that I did see coming and some that absolutely blindsided me) that it was a roller coaster ride to read.  I absolutely loved it.  The front cover says “A Will Parker Thriller” so I am hopeful that this means there will be more books based around him (or maybe they already exist?)  I will have to do some research…

In 2011, Will Parker, the young prodigy CEO of a big tech company, makes a coding mistake that costs a college student her life. To assuage his guilt, Will pursues a career in the FBI Cyber Division. Now, Special Agent Will Parker is called to investigate a murder scene at a Comic Con event in the Midwest, where the victim has ties to a radioactive quantum computer that Will was working on before he left his gig as CEO. Working with smart local homicide detective Dana Lopez and FBI stuffed-shirt Thomas Decker, Will discovers the victim was holding an auction for the computer on the Dark Web—and the bidding is still live. With bidders including a legendary Chinese hacker, Russian criminals sent by the Kremlin, and a corporate executive desperate to escape a scandal, Will once again finds a life in his hands when the victim’s daughter is taken hostage. A trail of blood and high-tech breadcrumbs leads Will deeper into mystery, danger, and a race against time to keep unlimited power out of the wrong hands.