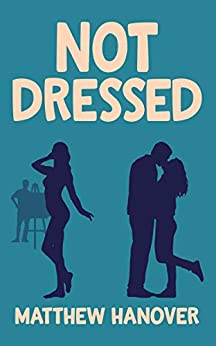 Not Dressed is a romantic comedy that is 45 chapters split into 3 parts.  Our main character and narrator is Jake who hates his job and is currently living with his girlfriend Lindsay who LOVES her job. Like, a lot.  The book begins with him claiming he will not be at this new job for more than 6 months and then jumps to 2 years later and he is still stuck.  Lindsay comes off to me as absolutely insufferable and almost immediately I wonder why Jake is still with her.  Jake’s sister is getting married soon so Lindsay signs them up for dancing lessons without telling Jake until after he reluctantly agrees to go along with her plan.  Then Lindsay’s talk radio show gets bumped to the evening time slot meaning that she won’t be able to attend the dance lessons.  Rather than cancel them, she suggests Jake go on his own and teach her what he has learned on the weekends.  Somehow, Jake agrees.

Jake goes to the dance lessons and thinks he is going to be stuck being paired with the teacher, but it turns out that there is another student who is solo and just happens to be a female, so of course they pair up.  Kaylee is a Trekkie and geeky fangirl to the extreme and she doesn’t know when to shut up. She drops Star Trek references everywhere but despite all this, she and Jake seem to hit it off and form an odd friendship.

I was intrigued by this book because it was a romantic comedy with a male author instead of a female. I tend to lean towards the female written books so I was curious to see how this might be any different, aside from the main narrator being from the guy’s perspective. (Most other books either alternate or are from the female’s perspective.)  There were a few instances where I thought, “no girl would ever say that” but for the most part I enjoyed it.  By about halfway through I found myself either absolutely hating or being very, very annoyed with all 3 of our characters – Lindsay (I was hoping with every new page that Jake would dump her ass), Jake and Kaylee.  They all bugged me for different reasons – yet while this may have made me opt out on finishing other books there was also something about them that just drew me in and I had to see how these stories would end.  There were some twists and turns along the way and I think I was pretty much ok with things in the end.

If you are a fan of a romantic comedy, maybe a smart geeky girl or hate your job in architecture, you might want to check out this book.  I received a free e-copy of this book from Reedsy Discovery in order to review this book. I was not otherwise compensated.

A romantic comedy of how love goes wrong—and right—when you’re a twenty-something still figuring out how to adult.

Jake, an architectural designer pushing thirty, is stuck in a job he hates. He’s spent the last two years overworked and underpaid in the dark basement of Burnham & Modine. He and his coworkers get through the day pulling pranks and gambling on how long interns will last.

Lindsay loves her job as the producer for a talk radio show. But her new timeslot means she and Jake are now working different hours. Worse, she expects Jake to teach her what he learns in a ballroom dancing class she can no longer attend. Already hurt by Lindsay’s prioritization of her career over their relationship, Jake feels betrayed when he accidentally discovers that to help pay the bills she’s been moonlighting—as a nude model.

Kaylee is Jake’s new partner at dance class. She’s a cute and free-spirited Trekkie geek who’s trying to figure her life out after going from high school valedictorian to college dropout. Soon Jake and Kaylee are spending more time together off the dance floor than on it … and the state of being ‘not dressed’ just might be contagious.