March 3, 2020 by ConcertKatie No Comments 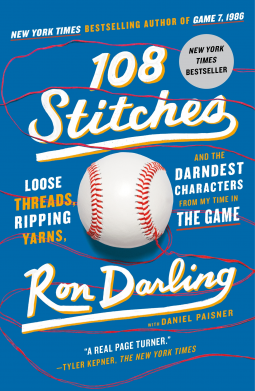 108 Stitches is a book from MLB Pitcher Ron Darling, which had some controversy surrounding it with some mentions he made about players on the 1986 Mets team.  Unfortunately he was supposed to make a CT appearance promoting this book that I was hoping to attend, but it ended up getting canceled.  I thought this book contained a lot of fun and interesting stories about his teammates as well as some stories about his time as an announcer for the game which he has been doing not only for the Mets games on SNY but some playoff games on TBS as well.  Most interesting were his stories about Yogi’s buttcrack (I never thought I’d ever type that!), Harvey vs Collins in the World Series and Wilmer crying.  The latter two I had watched on TV so it was interesting to get another perspective of these events.  While this book took me nearly a year to read, I blame my grad school load and not Ron’s writing style – had I had the time to actually devote to reading this book I am sure I would have finished it much sooner – but the chapters were set up in such a way that it was perfectly find to read one here or there and come back to it much later and still be able to enjoy the full story put forth.

This is New York Times bestselling author and Emmy-nominated broadcaster Ron Darling’s 108 baseball anecdotes that connect America’s game to the men who played it.

In 108 Stitches, New York Times bestselling author and Emmy Award-winning broadcaster Ron Darling offers his own take on the “six degrees of separation” game and knits together wild, wise, and wistful stories reflecting the full arc of a life in and around our national pastime.

Like the 108 stitches on a baseball, Darling’s experiences are interwoven with every athlete who has ever played, every coach or manager who ever sat in a dugout, and every fan who ever played hooky from work or school to sit in the bleachers for a day game.

Darling’s anecdotes come together to tell the story of his time in the game, and the story of the game itself.