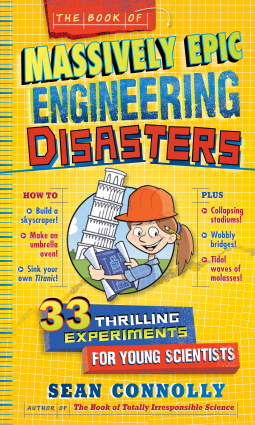 As an engineer, I always like reading about disasters. I guess it helps to know you’re not alone when you mess up and also as a way to realize what has happened in the past and try not to repeat those mistakes.

Each chapter in this book has one or two experiments to help drive home the scientific principles that had the starring role in the disaster which I think is really awesome and a great way to teach future engineers!

Each chapter talks a bit about the disaster, then tries to get to the root of what it was that went wrong in the disaster. There’s also a Turn Back The Clock section as well.  Illustrations throughout the book and experiments help add an extra element of fun as well.

Some of the disasters mentioned in the book are the leaning tower of pisa and the “unsinkable” titanic. There are many, many others featured as well.

I received a free e-copy of this book in order to watch this review, I was not otherwise compensated.

DANGER: This Book Contains Detailed Information About the Most Legendary Engineering Disasters of All Time!

Ever wonder why Italy’s Leaning Tower of Pisa has been slowly toppling over for centuries? Stack books on a foundation of paper balls to learn about rickety building foundations and center of mass. How about the 15-foot-high tidal wave of molasses that tore through the streets of Boston in the Great Molasses Flood of 1919? Karate chop a full tube of toothpaste (outside!) to demonstrate the messy behavior of non-Newtonian fluids.

With The Book of Massively Epic Engineering Disasters, kids get active with a fun, illustrated tour through the physics and technology of crumbling buildings, sinking ships, wobbly bridges, mud-stuck tanks, and much more. Covering a wide range of snafus, mishaps, and outright disasters throughout history—some infamous, like the Titanic sinking and Chilean miners trapped underground, and others lesser known, like the Fidnae Stadium collapse in ancient Rome—these 33 hands-on experiments put readers’ newfound knowledge into action. Each demonstration uses familiar household ingredients and helps break down the barrier between learning and doing—or even better, between learning and having fun.