Thursday night Javier Colon brought his Gravity Tour to the Ridgefield Playhouse in Ridgefield, CT.  At first I wasn’t going to attend, but after Ernie Halter was announced as the opener I started to more strongly consider the show and then I ended up winning  tickets from the radio.  So even though I thought I’d be taking a month off after doing 7 consecutive weeks of concerts, plans changed.

Just a note – a lot of the dates on this tour are being promoted as you being able to win a guitar if you buy tickets.  I wasn’t sure how this was going to work, but figured I’d be out of the running since I had won the tickets.  It seems that there will be 1 winner chosen at the end of the tour from everyone who bought tickets, it’s not being done on a show by show basis.

Ernie opened the show and was really funny and played about an hour even though his set was only 7 songs – I love how he tells stories about the songs and his life and other funny things during his set and I’d much rather less songs to hear more stories. His set was: I Look Good On You, Come Home To Me, No Diggity, Water Falls, Black Coffee In Bed, Whisper (by request), Pretty Girl (by request).  I liked his story before one of the covers he was going to… he mentioned it had a rap and I had a feeling it was going to be Water Falls and he had overheard someone at a show saying that they “knew it was a James Taylor song but weren’t sure which one” haha. I love his acoustic throwback album so it was nice he did a few from it.

Ernie also ended up playing guitar during Javier’s set along with Matt Cusson on keys.  Javier mentioned when he came out that he lost his voice a week or so ago and it was still coming back but he didn’t want to cancel the show.  Considering how bad his speaking voice sounded I was a bit concerned for the rest of the show, but if it’s even possible it seemed like he was sounding better and better as the show went on.  They also adjusted the key of a few of the songs since he wasn’t really able to hit the higher notes he usually can but if he wasn’t discussing it on stage with Matt to go “down 2” I’d never have even realized they did that.  Like Ernie, Javier’s set had a lot of stories as well.  One story was about how his wife tells him he talks to much and people go to his shows to hear him sing!   He mentioned that he is heavily influenced by James Taylor or “JT” not to be confused with Justin Timberlake and how he wouldn’t be singing a Justin song – but then ended up doing Cry Me a River (or a good majority of it) and told about how he met him when he was golfing with Adam Levine a few weeks ago but couldn’t ask for a picture because that’s just not what you do so he had no proof but to trust him that it DID happen.  He then did James Taylor’s Never Die Young.

The other highlight of Javier’s set was when he was playing with a new “toy” he had.  It was a pedal that could distort not only the guitar to sound more metal (or other sounds too) but it could distort his voice to make it sound like he was singing harmony with himself.  He did a bit of Metallica’s Nothing Else Mattered and mentioned that the harmony part made it sound like a lot of country songs so he did a medley that included Taylor Swift’s Mean, Florida Georgia Line’s Cruise and Wagon Wheel. (I’m not sure who did that one originally but I know Darius Rucker has made it pretty popular recently)  When he just talked through it when it was on that setting he sounded like the devil and he mentioned how he had scared his son when he asked him to “come here” when using it.

I wasn’t too sure on the photo policy – they said “no flash photography” and wanted us to put our phones away and security was going around shining lights in people’s faces so I only “snuck” a few photos. 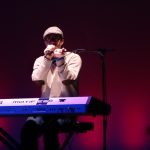 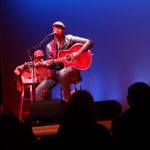 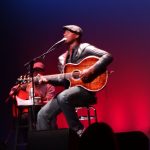