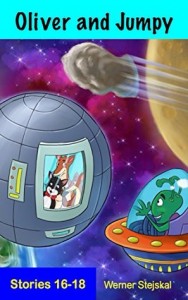 Oliver and Jumpy are back with another triplet of adventures. I have to say, these were probably my favorite stories of this series that I have read. They didn’t seem to be as strange or controversial as some of the others and as always, the illustrations are just wonderful! (Although him jumping from the tree with a table cloth in the second story could be cause for concern)

In Who Am I, Oliver gets hit on the head with a coconut and ends up not knowing who he is or where he is.  A bit like “are you my mother” Oliver wanders around trying to figure out who he is! In the end, once he finds Jumpy, his memory comes back to him.

Story 17 Up the Tree

Oliver finds a really tall tree and decides to climb it to explore. He meets a bunch of creatures and characters and at the top of the tree finds a beautiful rainbow.  Once he gets to the top, he decides to come down using a table cloth as a parachute instead of climbing all the way down.

The president of the country where Oliver lives tells Oliver that they need more moon crystals at the hospital to make the sick people well again.  Oliver, Jumpy and Joey were chosen to go to meet the Man in the Moon and pick up some crystals. A giant throws their space capsule to the moon and they land and meet aliens. After they collected the crystals, the aliens catapulted them back to earth. They were heroes!

If you’re interested in this series, they are often on Amazon.com for free so be sure to check them out!