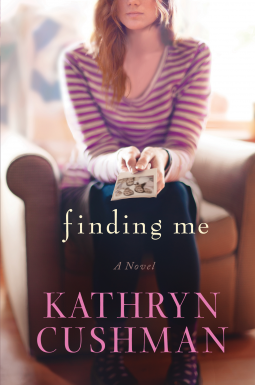 Finding Me is about Kelli. When we first meet her she is just cleaning up her parents home after her father and stepmother were killed in a car accident.  She goes into her father’s office – previously off limits – and finds a bunch of photos from the 80s – which she thought were gone.  As far as Kelli knew – her mother, sister and brother were all killed in a fire and everything they had was lost as well.

But as it turned out – her family was alive and well in Tennessee and her father had faked his and her death the start a new life with her stepmother when Kelli was 1.

Kelli decides to from California and wants to stay for 1 week just to see everyone.  She ends up getting a job at the store owned by her father’s best friend and he figures out her secret. He promises to keep it and knows that if she wants to tell her family she will.

But can Kelli tell her family – people that she’s grown close with in the few months she’s been in town – the truth?

I really liked this book. It was a plot different than any I had read before and I didn’t want to put it down, I wanted to find out what Kelli would do – run away back to California or tell her mother and her sister who she really was?  Definitely recommended.

A Contemporary Drama of Family Lies
and Forgotten Loves After her father and stepmother’s accidental death, Kelli Huddleston sorts through their belongings and learns a shocking secret. Years before, her father faked his death during a boat wreck at sea–and faked Kelli’s as well. He’d run from a wife, a son, and a daughter back in Tennessee, meaning Kelli has a family she’s never known.
She’s already cashed the payout on her dad’s life insurance check and looks at it as her ticket to a new life. The lure and puzzle of digging into this hidden past is too much to resist, and she soon finds herself in Tennessee. When the trip threatens to open doors to the past better left shut, and her plans for the future are threatened, Kelli must make an agonizing choice that will change her life forever.