October 13, 2012 by ConcertKatie No Comments 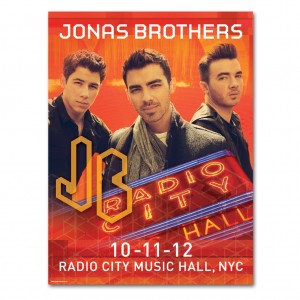 Thursday night the Jonas Brothers made their return to the stage at a sold out show at Radio City Music Hall in New York, NY.  Trying to get tickets was a struggle, my friend and I were forced to get singles with me about 7 rows back and her about 10 rows back.  You can’t really complain with the seats – though it would have been nice if we were together.  What was really crazy though, was that my friend Megan somehow had the seat next to me! We couldn’t get over it for the whole show that we were together and had no idea before hand.

The show was set to start at 8, but you know how that goes.  There was no opening act, and the guys made it to the stage at about 8:30.  The entrance was kind of dramatic, they had the curtain down and then there was a screen when it went up with the guys silhouettes on it.  They kicked off the set with When You Look Me In The Eyes, which I thought was an interesting way to start the show. But it ended up being rather emotional, so maybe they knew what they were doing after all.  The set overall seemed to be a bit of a roller coaster with slow and fast all mixed in together and not a chunk of the show devoted to ballads.  I’m not sure really how I felt about that – but it probably was on purpose as well.

The show will actually be replaying today online at VyRT from 12pm – 12am, but I think that you had to buy a “ticket” before the show originally was performed in order to be able to watch it.  I will be checking it out later, but this review is all from memory…

My least favorite moment of the show was when Joe ended up almost right in front of us during “That’s Just The Way We Roll” and changed “Battle dance against Hanson” to “Battle Dance Against One Direction”! How rude! haha

For Turn Right they had the band sing most of the song to kind of give them the spotlight (although there really wasn’t a spotlight, the lighting kind of stunk) and let them be up front for once which was cool.

They did 3 new songs – Let’s Go, First Time and Wedding Bells.  It is assumed that Wedding Bells is about Miley.  I came to this conclusion myself during the song – but I can’t tell you exactly what it was that triggered it.  I wasn’t the only one though as many news outlets today were reporting the same thing!


They did several covers – I don’t think We Found Love was able to be shown on the stream.  During the performance the side screens actually had text on them saying they were not allowed to be shown because they didn’t have the rights (so I assume that the side screens were the feeds that those watching online were getting)

After they did Falling Slowly from Once, they did a remixed version of Pushing Me Away in a kind of Once type arrangement (this probably makes no sense to anyone that wasn’t there)  There was even what could be considered “dancing” but was more like choreographed stomping.

They also remixed Hold On – and I am pretty sure Joe forgot the lyrics.  Of course, they stopped singing a lot for the fans to sing along – but this was the only time that it seemed like it was not being done on purpose.

Another weird part of the night was when a dancer appeared on stage while Nick was singing A Little Bit Longer.  At first I was a bit confused because I didn’t know if she was someone who snuck on stage or what.  Then she started dancing so I figured she was part of the show.  She also had on dark lacy pants and when her dress went up the girls around me all screamed out “Oh my GOD!” in disgust!