Book Review: The Girl Who Was On Fire

October 17, 2012 by ConcertKatie No Comments 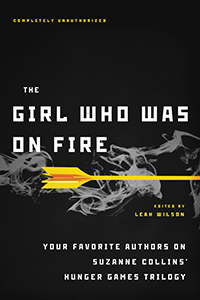 The Girl Who Was On Fire is a series of essays written by other young adult authors dissecting the Hunger Games trilogy.  This is a re-release called the “movie edition” which included several additional essays about the movie in addition to the stories about the book.

The essays do mention events from all 3 of the books so it is best if you have read all 3 books and seen the first movie before reading the essays, unless you don’t mind having some events spoiled.  That said, I will try to avoid spoilers in the rest of my review, but you might not want to continue reading if you don’t want to be spoiled.

The essays talk about the love triangle and Peeta vs Gale (and why current YA novels that are popular all seem to involve a love triangle), relating the Hung Games which is supposed to be  this big science fiction fake thing, but when you compare it to current reality TV games – like Big Brother – it doesn’t seem so sci fi and off the wall after all.

While a lot of the essays do focus on the reality tv aspect – a couple focus on the technology.  There are Tracker Jackers in the game, genetically engineered bugs, like wasps that can kill with their sting.  Is there a possibility that this is in our future – in real life? We’ve cloned a sheep after all.  Is using this technology for bad just around the corner?

And one essay talks about if the 3rd book sucked.  It was by far my least favorite book so it was interesting to see why the author thought this was.

This book will definitely make you think and would be a great companion for any one who has read the book but wants to think about it more – especially for teachers looking for lessons around the book in their classes.

Katniss Everdeen’s adventures may have come to an end, but her story continues to blaze in the hearts of millions worldwide.

In The Girl Who Was on Fire – Movie Edition, sixteen YA authors take you back to Panem with moving, dark, and funny pieces on Katniss, the Games, Gale and Peeta, reality TV, survival, and more.

The Girl Who Was On Fire covers all three books in the Hunger Games trilogy.