October 19, 2012 by ConcertKatie No Comments 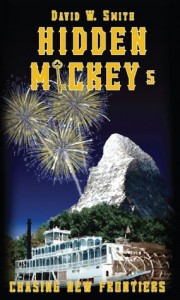 Chasing New Frontiers is the 5th book in the Hidden Mickey series.  I have no read any of the other books in the series, so at first I was not sure how this would affect my reading and enjoying of this book.  It is a fictional story based loosely on a true story that tries to incorporate the magic of Disney as well.  It seemed like a stand alone story, or if it related to the others I didn’t get that vibe from it.

It did take me a little while to actually get into it though.  There were several chapters going back and forth between the 60s and modern day (2010) and it took me a bit to get to figuring out who was in which time period (it says at the beginning of each chapter too, but it was still confusing me for some reason.) About halfway through the mystery of the story really started coming together and I got in to it.

“Missy” (actually pop star Malaysia) meets Blain, a guy who works at Disneyland.  While they are out they find a really old wallet. In the wallet is some money and a cryptic note and a key.  Somehow they follow the note to various locations around the park and near by to try and find out more information.

Meanwhile, they find out that back in the 60s a lot of money went missing from the park and it hasn’t been found in 40 plus years.  They think that this might be what the key will lead them to.

There are some other twists and turns along the way too – but I don’t want to give it away.  All in all in was a great mystery and while some of it was predictable there were a few twists in there I was certainly not expecting at all! I definitely recommend this for Disney enthusiasts and especially those who love a good mystery book.

Hidden Mickey 5: Chasing New Frontiers follows Disneyland cast member, Blain Walters, as he and a beautiful Swiss visitor to Disneyland, Missy Johansen, stumble upon a decades-old, lost wallet. The wallet holds the key to a forty-four-year-old mystery of lost, stolen money and Walt Disney’s legendary and mysterious red-diamond pendant. While Blain and Missy follow a trail of lost clues, they also find themselves wanting to follow their hearts as they find a real connection with each other. Adding to the intrigue, Blain is unaware that Missy is in reality—and incognito—the rising international pop star from Switzerland, Malaysia Hosiner. Where do the cryptic clues lead the young couple? How long can Malaysia keep her true identity a secret? And, who else seeks the long-lost Disney fortune?