Book Review: 10 Christians Everyone Should Know

October 14, 2012 by ConcertKatie No Comments 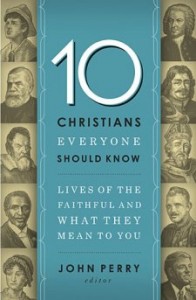 I have read several of the “Christian Encounters” series books published by Thomas Nelson by various authors.  But when I read those books I tend to choose the biographies on people I am already somewhat familiar with. I am a devout Christian and someone who you can see wearing Christian bracelets and neck pieces. With the book 10 Christians Everyone Should Know, I was able to get a little bit about several christians, some of which I have already read the Christian Encounters book on and others that I didn’t know much about at all.

The book is just shy of 300 pages (with the last 50 of so being Notes that are marked throughout the chapters), devoting a decent chunk of text to each of the 10 people in the book.  While the biographies are not as thorough as reading the book devoted to each individual, it really gives you an idea of who they are, what they stand for as well as their Christian beliefs.  At the end of each short biography, information on the author and full Christian Encounter Series book is mentioned.  There are a few that I hope will pop up on BookSneeze because they have gotten me interested!

This is a great book if you don’t have the time to devote to each individual Christian Encounter Series book, but are still interested in finding out more about the 10 Christians Everyone Should Know.


Disclosure of Material Connection: I received this book free from the publisher through the BookSneeze®.com <http://BookSneeze®.com> book review bloggers program. I was not required to write a positive review. The opinions I have expressed are my own. I am disclosing this in accordance with the Federal Trade Commission’s 16 CFR, Part 255 <http://www.access.gpo.gov/nara/cfr/waisidx_03/16cfr255_03.html> : “Guides Concerning the Use of Endorsements and Testimonials in Advertising.”

Jane Austen, Sergeant York, Saint Patrick—What did they have in common?

Two thousand years and still going strong: that’s the story of Christianity. And while the Christian martyrs and saints and orators may have gotten more press, the fact is the faith has been carried through history in the hearts and deeds of believers who—though beloved to us now—were simply living ordinary lives of devotion.

“It would be almost impossible to imagine ten people more different from each other than these,” editor John Perry says. “This [is] the first truth of Christian living: anybody, anywhere can be a champion of the faith, an example and inspiration to all who follow.”

There’s no dry biography here, though. Each story teems with fresh insight. D. L. Moody did some of his most powerful evangelizing by befriending ragged street children in Chicago. William F. Buckley never delivered a sermon, yet a Christian worldview informed his erudite, witty, output in print and broadcasting. To compose her poems, Anne Bradstreet had to understand science, history, the Bible, and literature, not to mention the political scene in both Massachusetts and England. You’ll look with new eyes, also, on the lives of George Washington Carver, Jane Austen, Galileo, Johann Sebastian Bach, Sergeant York, John Bunyan, and Saint Patrick. You might think you know their stories . . . but you don’t. Not yet.

For lovers of biography, for homeschool or study groups, for anyone seeking encouragement in the Christian walk, 10 Christians Everyone Should Know is a valuable resource.