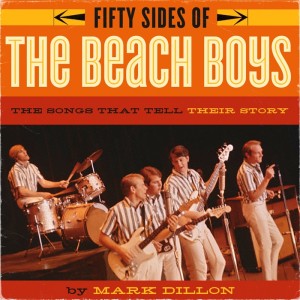 Fifty Sides of the Beach Boys contains the story of 50 of the Beach Boys greatest songs – as told by the band, people who worked on the songs and famous fans – including Alice Cooper and Zooey Deschanel.  While I wouldn’t call myself a Beach Boys fan (my parents don’t like them so I never really heard much of their stuff growing up), I always enjoy reading about band and music which is why I chose to check out this book.  Going down the list of 50 songs, there were way more that I recognized than I thought I would have.

Each song is a chapter and before the write up it gives you all the information about the song which I liked – who wrote it, who sings lead, who produced it, when it was recorded and released, where it peaked on the charts and what albums it appears on.  This will make it really easy for me to track down any of the songs if I feel like checking them out after reading about them!

I definitely recommend this book for any Beach Boys fan and any music fan as well, it is an interesting approach to writing about the band and I really enjoyed it.

An original look at a beloved band, Fifty Sides of The Beach Boys chronicles the story behind 50 of their greatest songs through exclusive interviews with the Beach Boys, their collaborators, fellow musicians, and famous fans.

The Beach Boys’ music is as influential and fresh as it was 50 years ago, and this innovative retelling of how the iconic rock group became an essential part of American music history couldn’t come at a better time.