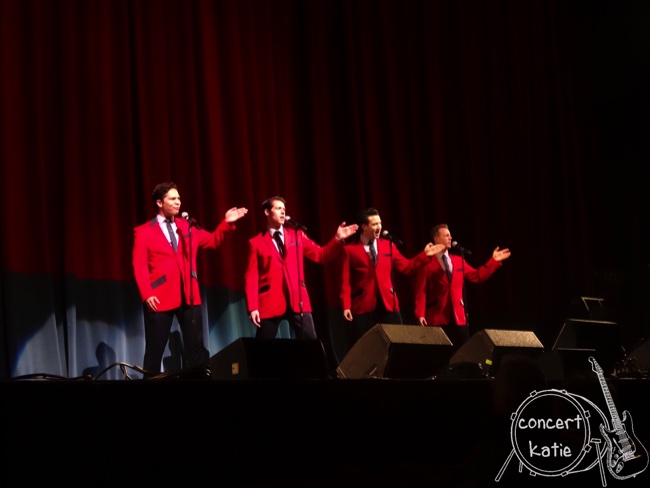 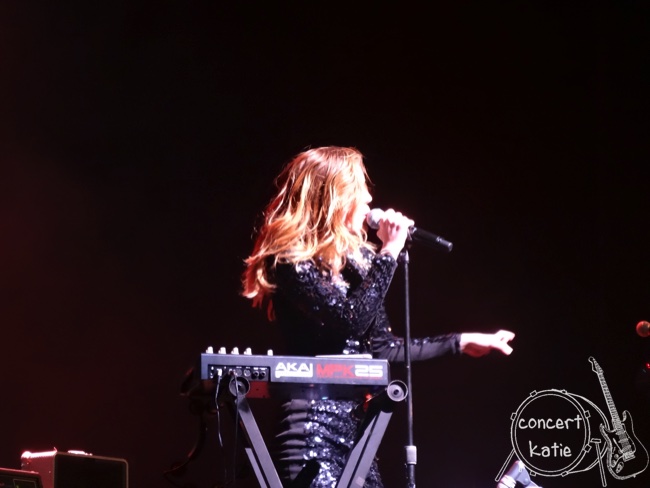 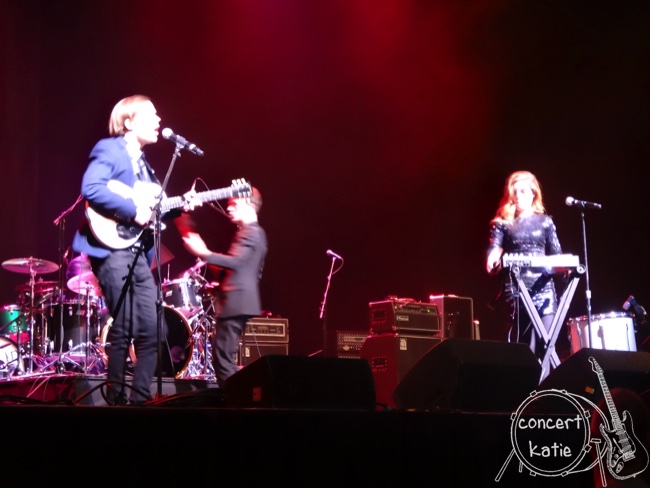 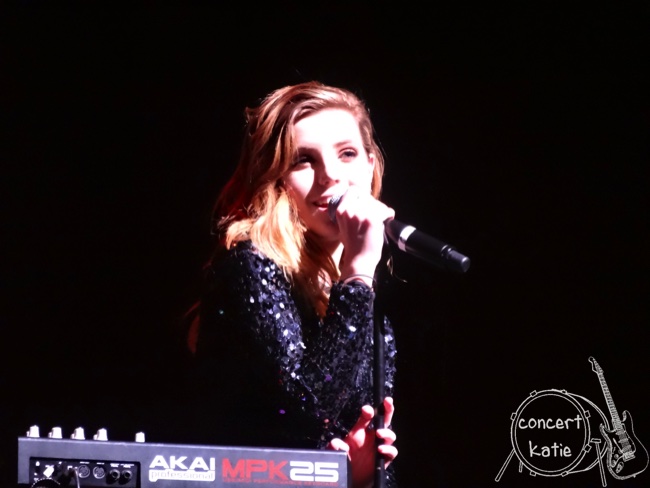 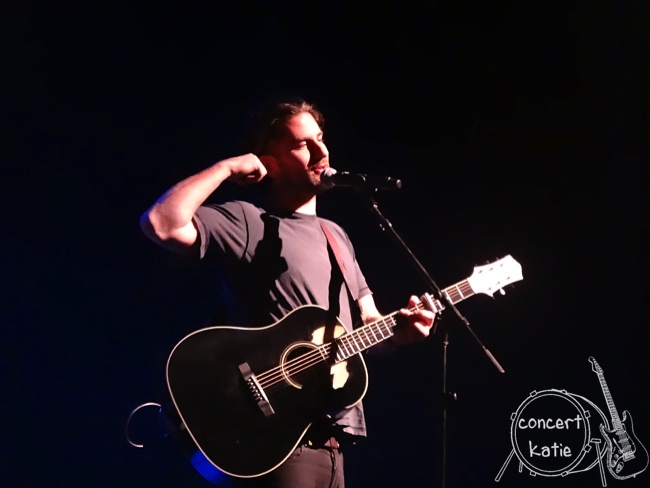 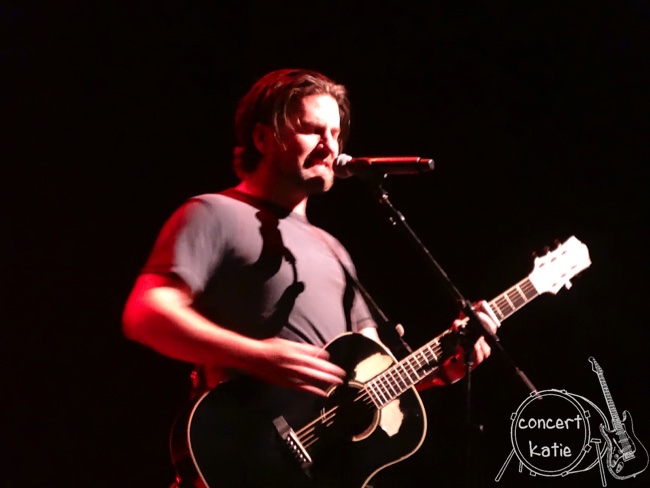 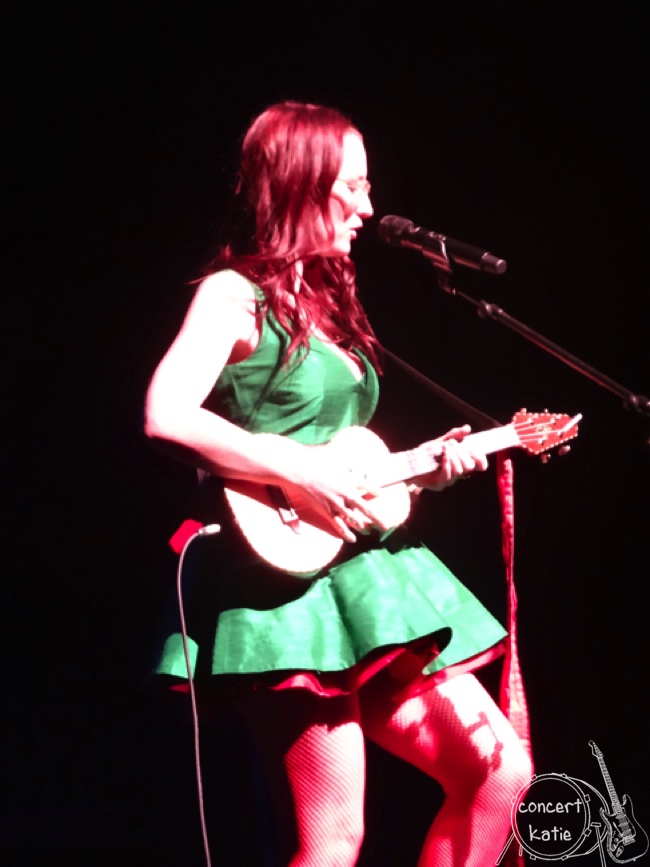 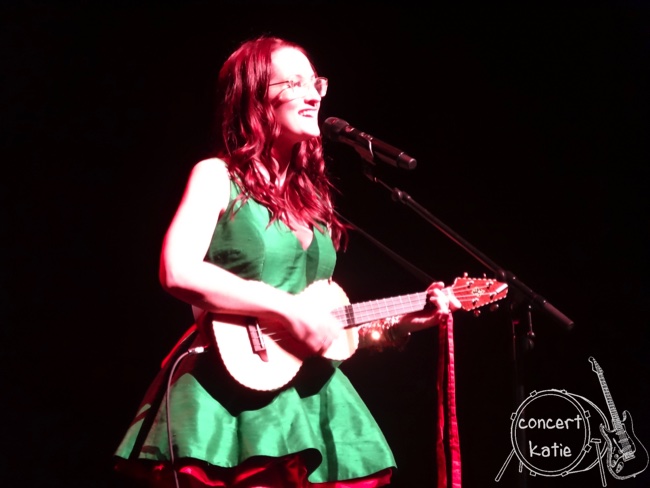 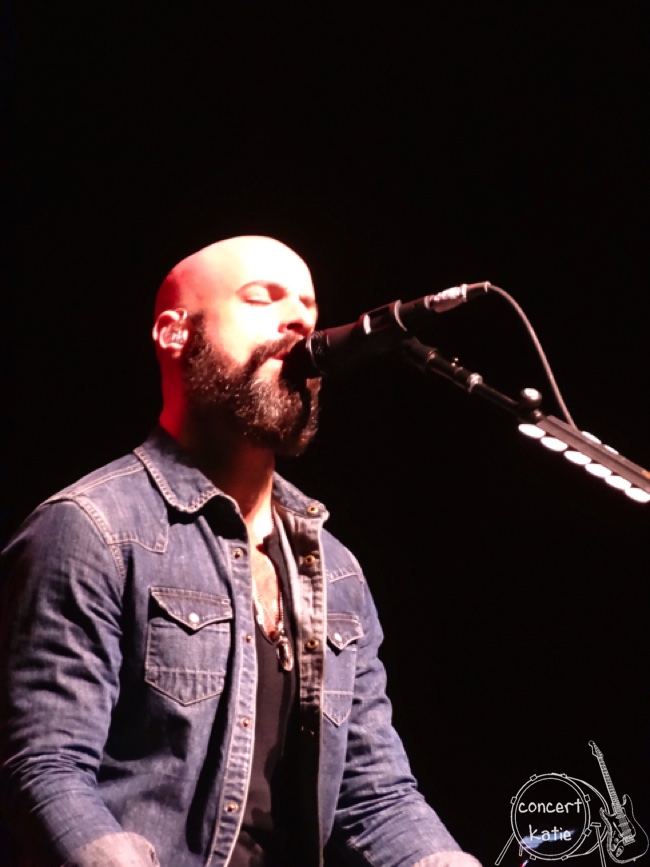 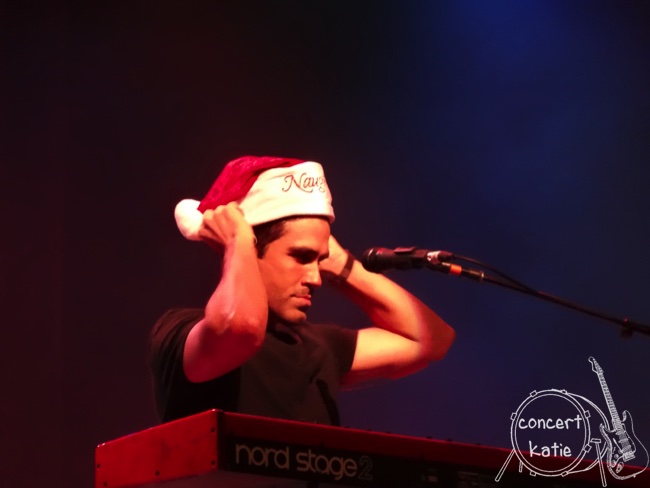 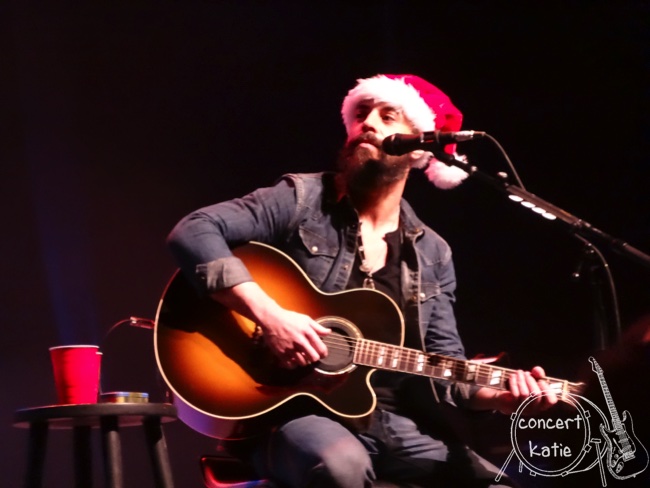 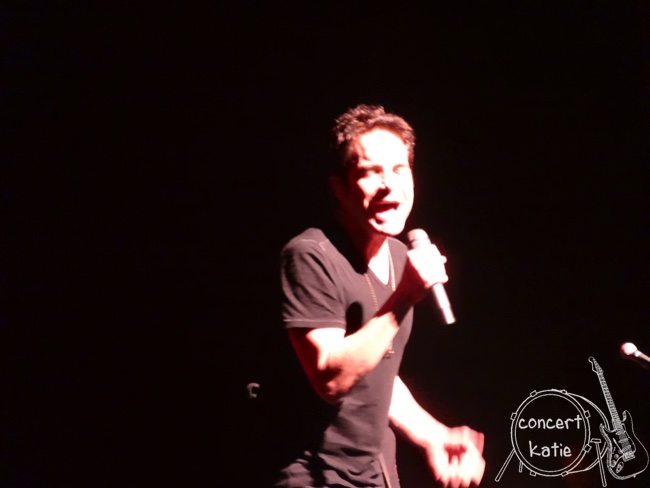 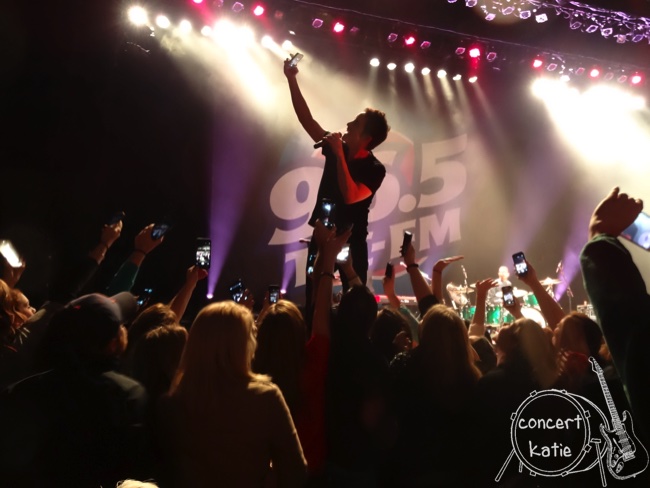 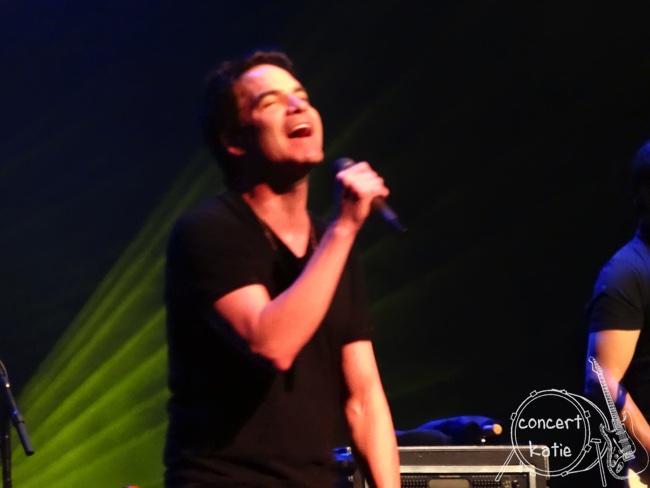 Friday night was the 2014 TIC All Star Christmas concert. If you remember, last year we had HORRIBLE weather but the show still went on – and I went – but spent the night at a family friend who lived not very far from the venue.  This year the weather was much, much better though there were snowflakes here and there as I was driving to the show.

A couple weeks ago they announced that the JERSEY BOYS would be opening the show, to help promote that the show was coming to Oakdale in February. At first I was psyched because Drew Seeley is currently touring in Jersey Boys, but then I realized that with his tour schedule there was no way it was his boys at the show. And I was right.  They did a few medleys to kick off the show and they did a $20 off promotion on tickets for February.

Then it was time for Echosmith – they did a short set of 4 or 5 songs, one of which they had Pat Monahan from Train join them on.  They also kept asking people to stand like every other song because no one was really up to standing in the beginning of the show.

I was quite surprised that Matt Nathanson, pretty much the reason why I went to the show this year, was the next act to perform. He was super amusing, as usual.  He started his set with the song “Kinks Shirt” which he said he wrote about a relationship but later explained that he imagined it all and the girl he wrote it about had no idea until he mentioned it in an article.  Then he went in to his song Headphones, which I still absolutely love.  Next up he said that he had to warm us up faster because it was a shorter set and said if he started playing a song – would we sing it? He started playing Sweet Child O Mine and the look on his face of pure SHOCK when everyone started singing it was worth the price of admission.  Then he had us put our ARMS UP! To clap for Faster and said we could sit if we wanted but we had to dance in the chorus in our seats like our underwear were made of jello and we were at Mardi Gras. A few people nearby didn’t do anything during the song and he totally embarrassed them when he called them out.  He also did Come On Get Higher with a You’re the One That I Want sing along and then finished the night with another song where the crowd sang most of it – AC/DCs You Shook Me All Night Long. (And somehow I know way more of that song that I thought I did!)

Then it was time for Ingrid Michaelson. Her set was 40 minutes and she kept mentioning how there was a clock in front of her that was counting down how much time she had left and how much she had already played. A couple of times she just counted with it and mentioned that it was distracting. I didn’t keep track of her setlist, but I believe she did: Be Ok, Winter Song, Mele Kalikimaka, Parachute, Time Machine, The Way I Am & Girls Chase Boys. There may have been more than that too. She talked about how that morning she was in New York City for a Women’s event and saw Iggy Azalea, Ariana Grande (she said she’s an elf child but a hot one), and Beyonce – but none of them saw her.  She also had on a pretty awesome dress that she said her cousin made for her – and was quick to point out that we shouldn’t worry because she had shorts on underneath.  During one of the lulls, a group started singing Happy Birthday to her – she seemed very surprised by it (her birthday was 2 days before) and said that had never happened to her before! But she became my personal hero when she stopped a song to be a bitch to some woman who was being SUPER loud.  I didn’t realize that she could be heard on stage too (she was a ways behind me!) but I guess so because she told her to be quiet during the quiet song and could go back to being loud later.  (But really – if you go to a show and there is an act you don’t care about? You have 2 options. Sit there and take it in – maybe you’ll be surprised. OR go to the freaking lobby and chit chat with your friends if it is THAT important that you have a conversation at that moment)

After Ingrid it was time for Daughtry – who had quite the beard going on. They started their set with Feels Like Tonight and had a more broken down acoustic set up for the evening.  Then they did It’s Not Over and Battleships. After that they were all pelted with Christmas hats (Chris said that the girl who threw them had good aim – I did see she hit the keyboardist square in the chest with his) they put them on but then said they’d wait because the christmas song was not the next song in the set. Next they did a cover of Wicked Games – which Chris said was a song that he wished he had written.  Then the Santa hats went back on for a cover of Elvis’ Blue Christmas. They finished out the set with Over You, Home, September and Waiting For Superman.

Closing out the show was Train. They sang lots of songs and I thought about how I have seen them 6 times, yet can not stand them.  I did consider leaving in the middle of the set but wasn’t sure if they’d pull any of the other artists out on stage again and if they did, I didn’t want to miss it. (They didn’t.)  But there was a boy in the front row who was a BIG fan and pure entertainment for me the entire show – so it was nice to see him enjoying the show. Pat grabbed his hand a few times and they even blew each other kisses. It was really sweet.

Cadillac, Cadillac
50 Ways to Say Goodbye
If It’s Love
Meet Virginia
Bulletproof Picasso
Calling All Angels
Save Me San Francisco
Shake up Christmas
Hey Soul Sister
Drive By
Drops of Jupiter
Wonder What Youre Doing For The Rest Of Your Life
Dream On

Some photos from Sunday in Baltumore. I got back and ended up pretty sick and now have NO VOICE so that is why there has been some delay in getting stuff done.

Hard Rock Cafe
Concert photos are under the cut

Hanson (the lighting was horrible for their set)

Some photos from Sunday in Baltumore. I got back and ended up pretty sick and now have NO VOICE so that is why there has been some delay in getting stuff done.

Hard Rock Cafe
Concert photos are under the cut

Hanson (the lighting was horrible for their set)

We got to Baltimore about 3pm, the show was set to start at 6.  We parked right near the buses and hung out near them for a little bit.  Around 4:15 Taylor came out and we got a photo with him.  I apparently missed Nick from Backstreet Boys running by (although it might have been better that I did miss him lol)  After we met Taylor, we headed over to the other pier to eat and go to the Hard Rock Cafe to pick up some bears. I was excited that they had the Mermaid bear!  I was told they were no longer selling that one.

When we got back to Pier 6, gates were open.  We went in and entered to win upgraded front row seats and then Maribeth played Plinko and won a T-Shirt. I opted to not play because I didn’t want to waste my luck on the front row to win a T-shirt.

At 6pm, VV Brown performed.  She did 6 songs.  Then they broke down her set and Angel Taylor came out and I believe she did 6 songs as well.  Next up was Serena Ryder and she also did about 6 songs. All 3 of the ladies were great, but I am always a little bit impatient and want Hanson to perform first haha

7:50 Hanson came out – the sun had just set (thank god – it was in a really bad spot blinding us for most of Serena Ryder’s set) and they also streamed their performance on the Mix 106.5 website and Hanson.net.  They did 9 songs,
1. Waiting for This/Watch Over Me/Rock N Roll Razorblade/In The City medley
2. If Only
3. And I Waited
4. This Time Around
5. Penny & Me
6. Thinking ‘Bout Somethin’
7. MMMBop
8. Give A Little
9. Where’s The Love

The place went pretty crazy for MMMBop and the crowd seemed really receptive of them, which was nice 🙂

Backstreet Boys were up next – I still forget that Kevin left the group sometimes.  Their set was really short! They did
Everybody (Backstreets Back)
If I Knew Then What I Knew Now
Shape Of My Heart
Straight Through My Heart
I Want It That Way

And let me just say for someone who had a sore throat, I was screaming along a bit too much…

Next up was Train – we only ended up staying for 2 of their songs.  Then we went to check out the bus situation and saw AJ go by and then security tried to shoo all the BSB fans away, then Taylor came out and they all went running back.  It seemed like they might have been gearing up to leave, and there wasn’t room on the barricades so we decided to just leave.

“Just leave” meant an 18 point turn lol to back out of the spot our car ended up in! And then get $3 in quarters when we left the parking lot. (Where was this dude and his quarters when I needed them at the penny machine at the rest stop?)

I still haven’t gotten my photos on to the computer – Ive been sick since I got home so most of my time has been spent sleeping! I will try to get them up tonight or tomorrow and make a few photo posts!