Locksley at the Wolf’s Den

Friday night, Locksley was set to play their first show of the year at the Wolf’s Den at Mohegan Sun.  I hadn’t seen them in several years (after seeing them multiple times on the Hanson tour as well as opening up for Taylor’s side project Tinted Windows) and I had no idea what their fanbase in Connecticut was.  I also thought with it being a Friday night, the casino might be packed.  But I was wrong.  One of the waitresses said that due to the stuff going on in Boston, the whole casino was a bit slower that day.

When I arrived, hardly anyone was seated and no one was in line.  I was asked if I wanted to be up close and was given a front row, center seat.  The closest I had ever been at the Wolf’s Den.  When the show started about an hour later, there was really only a handful of people there, but a crowd did gather around the outer perimeter here and there.

Since it had been so long since I had seen them last, there were a bunch of new songs that I didn’t recognize. And the ones I did recognize, they seemed to totally re-work!  Overall though it was a really enjoyable show, though I wish that more people were there to witness it!  They said that some of the new songs they had never done before and may never do again.

They played for about an hour and a half, and after the show I was able to get a setlist from the guy clearing the stage (good thing too because I had no idea any of these songs names!)

Open Up Your Arms
I’m So Glad
All Over Again
Rodeo
Black Ajax
A Ray
Sophie
Vilas Beach
Someone Our There
My Bones
Don’t Make Me Wait
Darling, It’s True
Touch & Go
Days of Youth
Lonely World
21st Century
Long Night In Heaven
She Does
The Whip
Away From Here
Let It Ride
New Sensation
Jealousy
On Fire
Nothing

In which we learn the lesson…

If it ain’t broke, don’t fix it! My new 26x zoom camera is full of fail in low light. 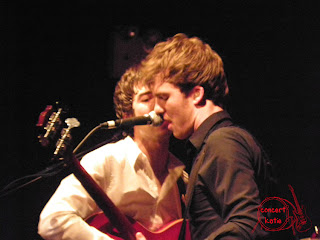 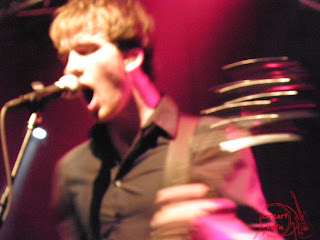 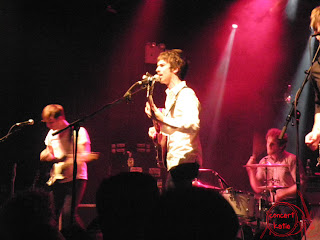 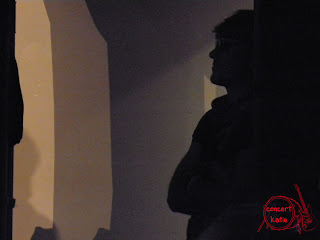 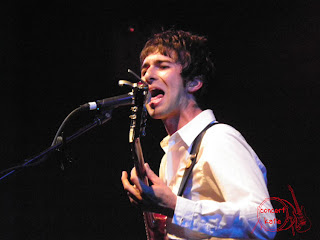 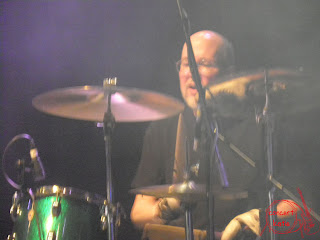 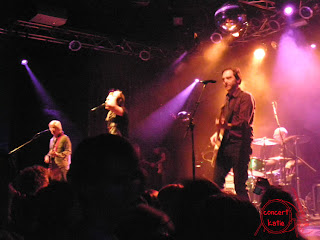 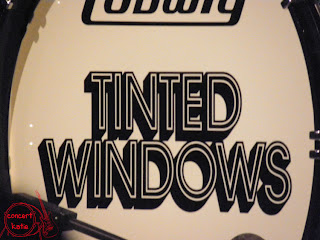 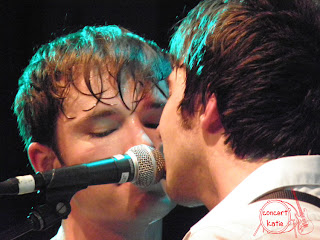 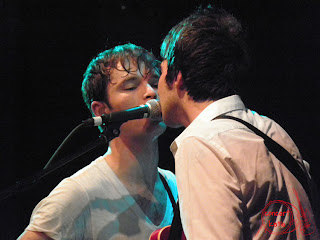 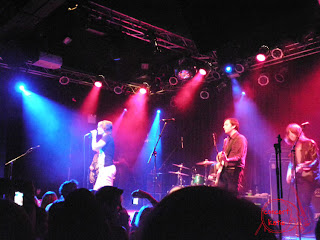 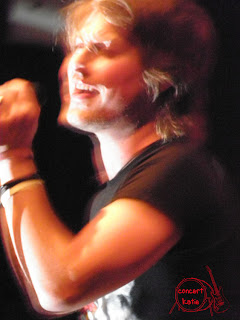 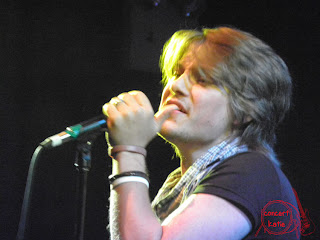 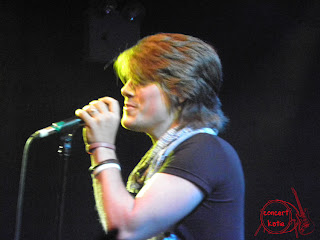 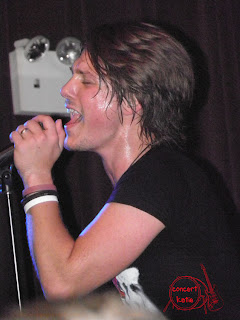 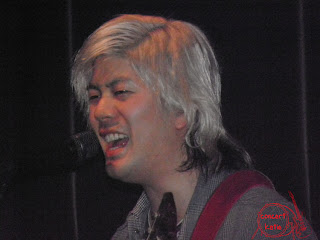 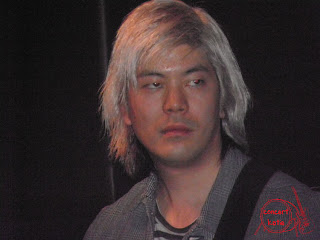 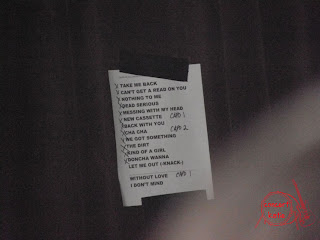 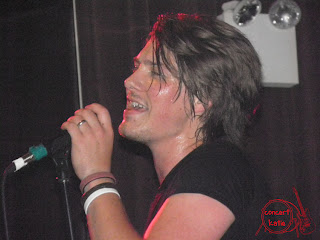 Last night I made the trip to New York City (yes, on a WORK night! gasp!) to see Taylor Hanson’s new side project, Tinted Windows. I almost had the chance to see them two other times, but it didn’t work out – so I was glad I would finally be getting the chance to be checking them out.

The band Tinted Windows is made up of former Smashing Pumpkin James Iha (whom I used to have a huge crush on back in elementary and middle school), Fountains of Wayne’s Adam Schlesinger, Hanson’s Taylor Hanson and Cheap Trick’s “Bun E. Fucking Carlos” (in the words of Taylor, that is)

It was quite a change getting to the venue a little under an hour before doors and looking at the line and seeing that we actually might have had a chance for front row. I was pleased, I just got a 26x zoom camera that I was dying to try out. (Unfortunately it looks like its going straight back to the store as it had major issues focusing in low light without using the flash!)

I had read that the highline ballroom offered seating on a first come first serve basis, so my friends Joey, Natalie and I decided to try that out. And were seated like RIGHT next to the stage. (Unfortunately on the opposite side of Kai of Locksley and James Iha, but I survived) They were amazing seats and the fact that I could sit the whole show and still see was fantastic.

Locksley came on at 9 (doors were at 7 so we had plenty of time to enjoy our meals) and while they are not the same 4 that I saw opening for Hanson (Aaron has left the band and has been replaced with Jordan) they were still fantastic. They are playing Brooklyn tomorrow night, which I might be attending, if I’m feeling up to it.

Taylor was watching from the side of the stage, really getting into them. I might have spent more time watching him than the band during some of the songs. Maybe. (If Kai wasn’t blocked by a HUGE dude and a mic stand, it might have been a different story)

Tinted Windows came out shortly after. I’m now being told it was a sell out crowd – the floor and tables did fill in very nicely closer to Locksleys set time. (When we first got in there was like 3 rows of people and we were a bit concerned that the show didn’t sell well, but once the main act took the stage the place was packed!)

Now, let me preface this by saying by this point I had a splitting headache so I wasn’t really getting into everything as much as I probably would have if I was feeling 100%. But, I just got their CD on Tuesday and have been listening to it in the car on my commute for the past 2 days. I felt like every song sounded EXACTLY like the cd. Which, I guess is a good thing because they didn’t sound horrible live, but I was hoping for a little bit extra.

The extra I did get seemed like Taylor trying to be “cool” saying words like “fucking” and “shit”. It seemed so out of place for him. I mean, he is a grown man and I am sure he says these words, but he never really says them on stage at Hanson shows (though I do remember a few “cusses” from the rock boat, which again leads me to believe he is just saying these things so people think hes a true rock star or something) so they seemed a bit out of place to me.

One thing my camera did get was an amazing photo of the setlist, so the list under the cut is completely 100% accurate to what was taped on stage. (And good thing, because I am not all that familiar with the song titles. I might have even had a cheat sheet typed into my phone so I could have an accurate list. Mayyybe…)

Only the setlist under the cut for now – I’ll pick out a couple of the decent pics (theres not many!) and post them at some point in the near future. (I might have Locksley Friday, The Little Mermaid Saturday, Demi Sunday and the Mets game on Monday if all goes according to plan, as well as getting over some random sickness that I had last night / today, so bear with me!)

Without Love
I Don’t Mind