December 29, 2022 by ConcertKatie No Comments 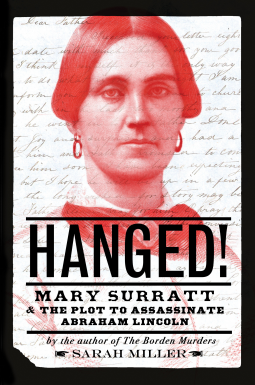 I am admittedly not a history buff and I had never heard of Mary Surrat before picking up this book.  Mary was convicted of being involved in the plot to assassinate President Lincoln and ended up becoming the first woman to be executed in the United States due to her supposed involvement.  The book takes information from all sorts of records from the time of her time in court.  Its definitely an interesting read and I’m not entirely sure if she really did do what they say they did or if people just decided they didn’t like how she looked so they made up stories about her and ended up believing them and convincing others they were true.  You’ll have to give it a read yourself to see if you come to the same conclusions or not…

From the critically acclaimed author of The Borden Murders comes the thrilling story of Mary Surratt, the first woman to be executed by the US government, for her alleged involvement in the plot to assassinate Abraham Lincoln.

A dubious distinction belongs to Mary Surratt: on July 7, 1865, she became the first woman to be executed by the United States government, accused of conspiring in the plot to assassinate not only President Abraham Lincoln, but also the vice president, the secretary of state, and General Grant.

Mary Surratt was a widow, a Catholic, a businesswoman, a slave owner, a Union resident, and the mother of a Confederate Secret Service courier. As the proprietor of the boardinghouse where John Wilkes Booth and his allies are known to have gathered, Mary Surratt was widely believed, as President Andrew Johnson famously put it, to have “kept the nest that hatched the egg.” But did Mrs. Surratt truly commit treason by aiding and abetting Booth in his plot to murder the president? Or was she the victim of a spectacularly cruel coincidence? Here is YA nonfiction at its best–gripping, thought-provoking, and unputdownable.