September 9, 2022 by ConcertKatie No Comments 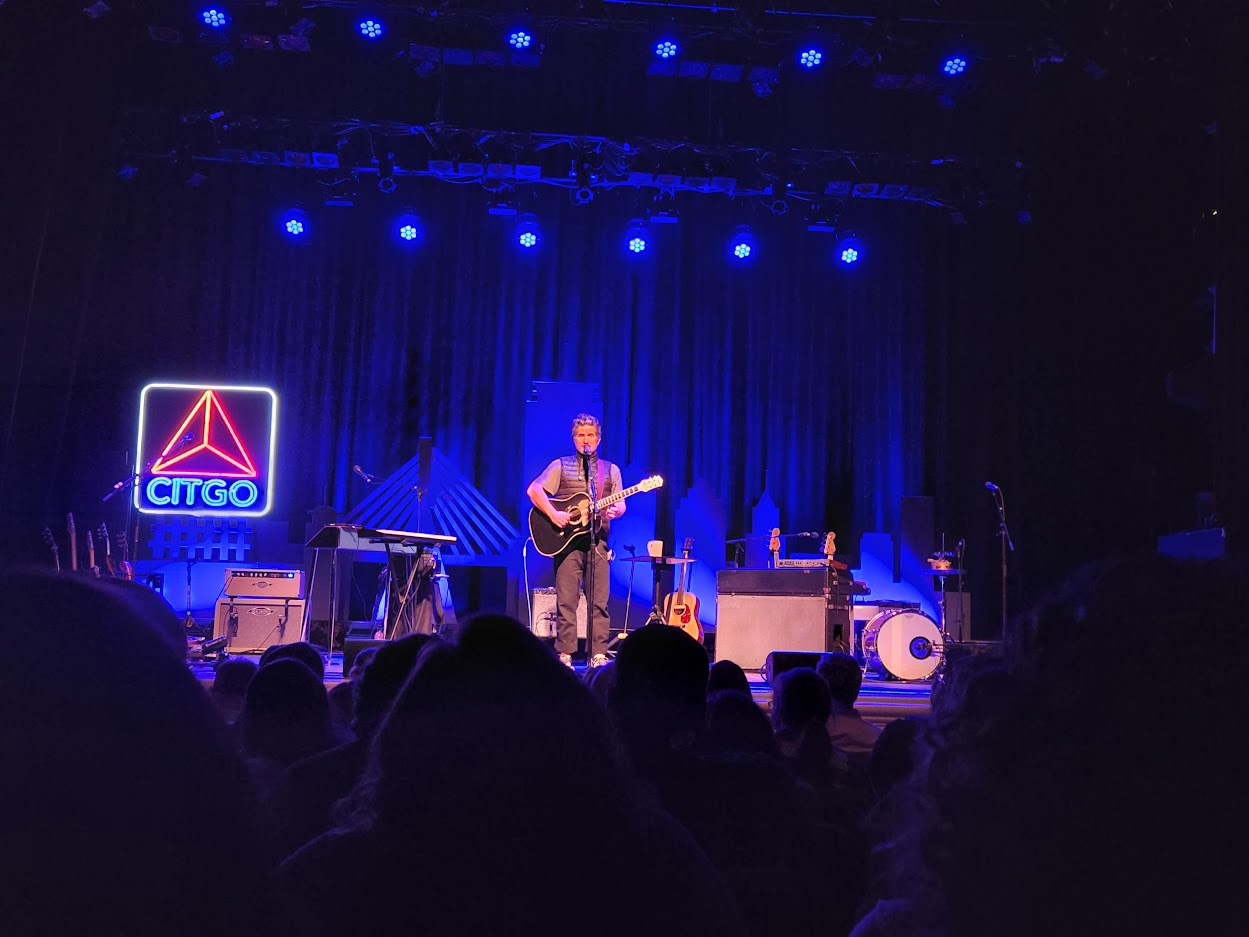 Lately I’ve been avoiding concerts during the work week, but when I saw Matt Nathanson was coming to Ridgefield on a Wednesday I made an exception. And when he added on a pre-show party, I knew I’d end up needing to work some late nights that week to make up for leaving early to go.  Due to covid concerns, the VIP portion was soundcheck, merch and Q&A only – no photos like they used to be.  Totally fine with me, I masked up and got there early to check in.

We were let in around 5pm, in to the stage area at 5:30pm after getting our merch (signed poster and coaster) and refreshments.  As we entered and Matt asked how we were, someone asked back how he was doing and he said something to the effect of, “well the trailer blew 3 tires and then the bus blew…” and I started to wonder if this was just the new “hey nice to see you” tour greeting since Hanson had said something pretty similar to me as well.  A lot of the Q&A time was spent talking about his daughter and I know far more about her now than I ever wanted and probably much more than she would want me to know.  I think Matt being in a room of people was therapeutic for him and I liked that a lot of his answers seemed to be honest and vulnerable.

He had a list of songs that were requested from his new fan club (which I am now in the process of trying to join!) and was saying which ones he *wasn’t* going to play, but then kept playing them.  Whoops.  We ended up getting to hear 4 songs – which he apologized that he needed to use a mic for because his voice was getting a bit froggy from the tour.

Initially the venue was saying we’d have to stay inside because doors would be open, but they ended up stamping us to let us leave and put the poster in the car (thank you!)  Venue doors opened at 6:30pm and the doors to the theater at 7pm.  Donovan Woods was the opening act and in between his songs he did almost a comedy act talking about them (and cracking himself up in the process)  I did enjoy him but I felt like he set me up with a false sense of security with the jokes and then ended with a sick/dead Dad song that ended up as a bit of a gut punch.

Edit this setlist | More Matt Nathanson setlists
For the show, Matt said the tour would be Some Mad Hope in it’s entirety every night as well as a huge chunk of Boston Accent and other songs.  When he started the set he said he didn’t like being told what to do, even when it was himself telling him what to do and didn’t seem too happy with himself for saying he’d play the whole album, but he did, and almost in order, except he put Come On Get Higher nearer to the end of the set instead of 5 songs in.  He also told us a little bit of background on each of the songs and related them to a Dawson’s Creek like drama.  I’m not sure his definition of “huge chunk” but we ended up getting I think 3 tracks off of Boston Accent (forgive me, I haven’t had much time to listen lately!) and a couple extras.
Overall it was a great show – with the exception of Most Obnoxious Concert Goer who was sitting about 3 people from me.  He was obnoxious as soon as he entered the theater during Donovan’s set with very, very loud “wooing” and very, very loud conversations with his girlfriend.  I was hoping if it continued during Matt’s set, Matt would shut him down and I wouldn’t need to say anything.  The woman in the row in front of me kept looking back and glaring at him and rolling her eyes at him, so at least I knew I’d have back up if I did need to speak up.  He kept yelling out ‘Illusions’ and Matt made a wise crack about wondering what he was like during intimate moments (aka now is not the time) and that he shouldn’t bother requesting a song Matt wrote in high school that he wasn’t going to end up playing.  A few songs later… “ILLUSIONS!” to which Matt yelled back “DELUSIONS!” and then security came and said something to him – I was hoping it was STFU but considering the yelling went on at least 2 more times and Matt even ended up saying “I feel bad for your girl, she is trying to get as far away from you as possible” and then he ended up yelling the lyrics “singing” along instead.  (I’ll give a minor pass there – but there was no need for him to be at the volume he was at.)  When the show was over I ended up walking past his seat to leave – only to see there were 5 to 6 cans of “bad seed”.  Yes sir, you are what you drink.
I’ve only ever seen Matt in CT and this is my second time with obnoxious people screaming out at him song requests (When that is *exactly* the purpose of the VIP pre-show!!!) but I am glad this time it didn’t result in Matt taking a song OFF the setlist like it did in Fairfield in 2019.  I’m now wondering if I should try to go see Matt in a different state or if that sort of drunk, obnoxious outbursts are just the norm at his shows.