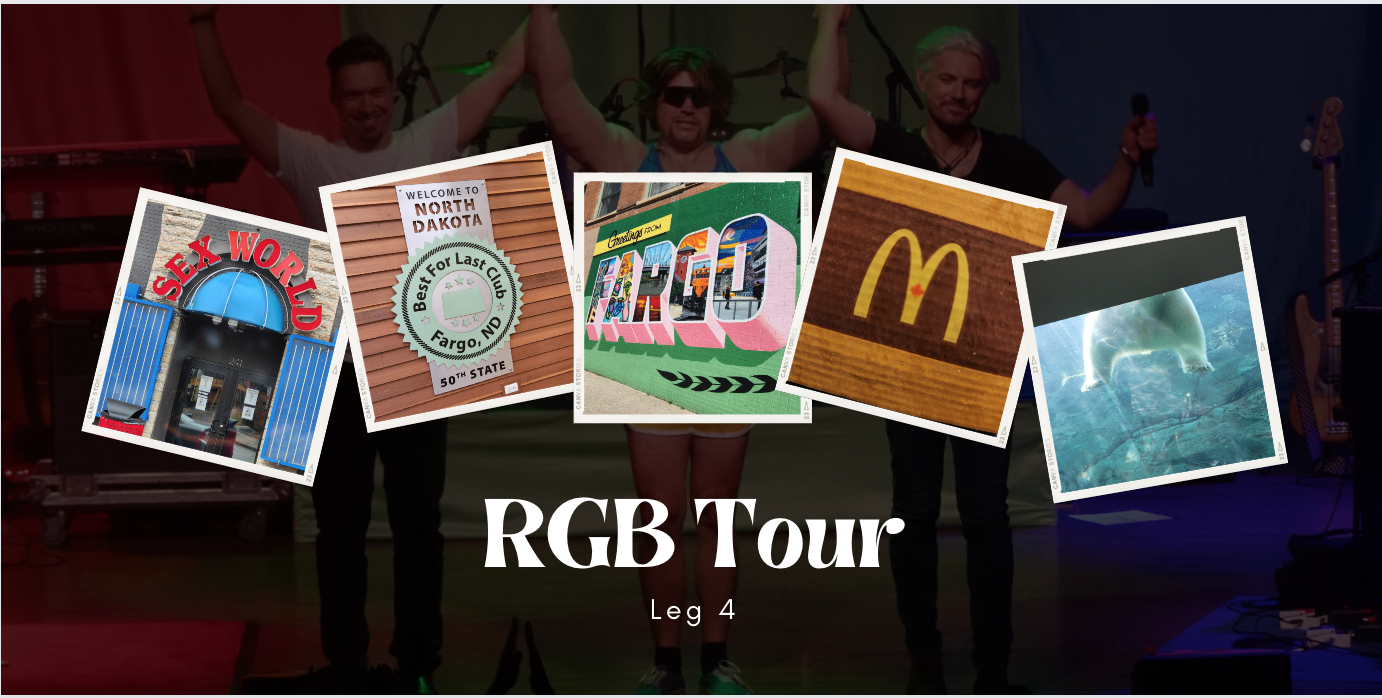 My tour travels are still going, but I need to use today’s off day to blog about the last 3 shows or by the time I finish with the next 3 I won’t remember anything.  I failed at journaling after each show so hopefully I’ll remember all the big things… [Note: My travels are over and I wasn’t able to finish this post early like I had hoped!]

First up was Minneapolis.  I took the first flight out from Hartford direct to Minneapolis at 6am and landed in MSP around 8am.  We picked up the rental car for this leg of the trip – an absolutely massive Toyota 4runner. I hung out at my friend’s place until another friends flight landed and then headed downtown to the venue and our hotel.  I was pretty wiped out from the day of travel and was asleep before the TV show I was watching even ended.

Friday was show day! One of the perks of being a member of Hanson’s fanclub is that you get to be let into the venue first.  When I got in line a couple of hours before doors, that line was relatively short and I made it in with plenty of time to easily find my balcony seat.  Allen Mack Myers Moore was once again the opener, though their time on the tour was coming to a close.

For the most part, this show started off similarly to most of the others I had been to so far, but I was pleasantly surprised that Isaac decided to do For Your Love. Of course he said he hadn’t yet done it this tour, but he’s not as great with Hanson setlist stats as I am 😉  Then there was a first – Zack Mack from AMMM joined the guys on stage playing harmonica for Dressed in Brown Eyes.   Taylor’s solo was once again Save Me – despite the fact that Rambling Heart was listed on the setlist. Zach Myers had been teasing about Reggie Willie (Zac’s character in the Don’t Let Me Down video) on social media all day, so when it took a bit longer than usual before the encore, we had a feeling that he was putting on the muscle suit. And that he was.  And for good measure he put a banana down his pants and then somehow got Zach Myers to take a bite of it (it ended up being thrown into the crowd.)

After the show we waited by the bus.  I was really mad at Taylor for doing Save Me again, but still ended up asking him for a photo at the bus (or maybe I just handed my phone to him while he was talking to some others about baby names and he knew what to do)  and Isaac came out as well and I got a photo with him. We saw Zac walking around a bit but he never ended up coming out to the barricades.

The next morning we headed for Fargo, North Dakota.  Since there’s essentially nothing to do in North Dakota they have a “last state club” since so many leave it for last when trying to visit all 50 states. Initially, that was the plan but when Hanson play a show in a new state, all plans go out the window so rather than it being #50 it was #31. (Hanson state #28)  We stopped at the visitors center, had dinner at Wurst Beir Hall and hit up a few murals in town before heading to the concert.  It was outdoors and at a brewery and no one had any idea what to expect – including the staff.  We started the show in the Box Car section but ended up moving into friends extra floor seats because the sight lines weren’t really great from the Box Car area once the crowd started filling in.  Zac ended up doing Fire on the Mountain as his solo after a friend requested it at her M&G.  The setlist said Isaac would be doing For Your Love again, but of course he decided to bust out River again instead.  Taylor finally did Rambling Heart in my presence. Since I had a seat, I decided I was going to time “jumping” up to stand for some of the show with Taylor’s jumping during If Only.  Except, somehow, he didn’t jump at all?  So this one will forever be the show where I jumped more than Taylor during If Only.  When there was a break in the set a song or so later, he explained that the stage was as trampoline and they were worried if they jumped they’d have gone flying into the crowd.

The show was at a brewery which led to a lot of drunken shenanigans with the crowd and a girl who was being escorted out for being too drunk ended up falling onto me and hitting my shoulder pretty hard on her way out. My friend told me that Taylor’s PSA about looking out for your friends was mostly due to the fact that she was so drunk in the first row. I’m all for having a drink or two at a show but know your limits and don’t ruin a good time for everyone else because you’re a loser who can’t hold your beer (literally and figuratively).

The venue is right on the train tracks (hence the ‘box car’ section) and since it was AMMM’s last night on the tour, they invited AMMM to join them on stage for a cover of “Long Train Runnin”  We didn’t stick around after the show at the bus and instead headed to Canada for our last show of this half of the run.

We got to the Canadian border and after some brief questioning were allowed to enter the country.  It was about 3am when we got to the hotel for the night.  Since I was reporter that evening we decided to take it easy and not do much of anything but hang out in the hotel room and finish up my list of questions.  When we go to the venue, I was sitting behind the Hanson.net Members Line in an effort to not get a last second sunburn before my photo with Hanson.  Their bassist, Andrew, came around the corner and asked me what part of Connecticut I was from. I told him and filled him in on the fact that one of my former coworkers was the father of one of his friends. Small world.  Except after he left – I wondered – how did he know who I was and where I was from?!  We had never talked about that before (in fact,  the story about my former coworker I had been wanting to tell him since 2017 and never had the opportunity!)

Then it was finally time to go in for my interview. As I approached them for my photo, I asked “are you ready for this?!” and they all laughed and Taylor said it reminded him of the song and started singing jock jams are you ready for this.  Then he asked me if I hadn’t been reporter before and I said that I had, but it was 18 years ago “ohh it’s been a minute” and then he asked me where I was from because he didn’t think I was from Canada so I told him No, I’m from Connecticut.  (How did Andrew know?!)

After the photo, they found a bench in the back of the venue that Isaac and I shared and Zac brought chairs down for him and Taylor to sit in and then threatened the staff that if they made noise while we were recording, he would beat them up.  We chatted a little bit before the interview officially started about their long stretch of driving coming up next and issues with the bus where I mentioned we were skipping the long drive shows but would be flying out for Vancouver, Seattle and Portland.  Isaac attempted to record the reporter interview and flubbed it, then tried again and continued to flub but Zac told him to just keep going (I think both he and I were worried we’d spend my whole interview time with Isaac trying to get it just perfect)

If you’re a Hanson.net Member, my interview is now posted in the archive!

After the interview the guys asked me a few more questions about the site and how I got the setlists and Taylor asked me if I had a request and I said “Lost Without You”.  At this point, we had held up doors opening on time (which my friends outside said was making them anxious but also that they knew it was because I was still talking to them so it was a good thing) and I was allowed to just stay inside.  I dragged one of the chairs Zac had brought to the front row and all my friends were able to join on either side of me.  Taylor did switch up his solo to Weird, but didn’t end up doing Lost Without You.  [Later I heard they had sound checked it twice in its entirety at the shows in Canada after this one]

My friend was able to snag me a setlist from the stage, but I noticed it had all the Calgary concert info on the top.  When Isaac came out for photos and signing I had him fix it (as well we add in Zac’s solo) and sign it.  The other 2 didn’t end up coming out, but the annotated setlist will be a nice addition to my photo and photo mat I had the guys sign after the interview!

The next day a couple of my friends had to work, so another friend and I went to the Zoo!  We heard they had polar bears AND mobility scooters and really you can’t beat that.  The polar bears did not disappoint and we probably could have stayed there all day watching them play and fight and sit on our heads, but we ended up having to rescue a friend from the airport and drive her back with us as apparently my flight delay luck rubbed off on her. (After we made fools of ourselves trying to pronounce all the dinosaur names)

After hitting up the Manitoba welcome center and checking out some touristy shops, we made our way back to MN with a stop back in ND for dinner on the way.  We had an off day on Tuesday before our final leg of the tour kicked off! Which hopefully will be posted quicker than this post was? But I also may just sleep for all of September and write nothing.  We’ll see…