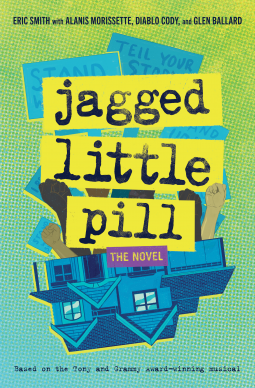 Jagged Little Pill was the first CD I ever bought and I’m surprised I didn’t wear it out playing it so much on my discman in 6th grade.  Last summer I finally got the chance to see Alanis live on her Jagged Little Pill Anniversary tour.  I’ve yet to see the broadway show, so when I saw there was a novel based on the musical, I had to read it.

I went in to reading this book having 0 idea about what the musical plot was – just very much so knowing the album. (There were a few easter eggs of lyrics here and there, I noticed.)  Turns out it is about a family – Frankie is adopted and her brother Nick and their parents as well as some of the kids that they go to school with.

Each of them is dealing with their own struggles and trying to overcome them in a town in Connecticut that likes to keep all their troubles secret.  Some of them end up coming to light and the story details how they all deal with them and help each other deal with them.

This was a pretty quick read but I really enjoyed it and am hoping all the more that I’ll get a chance to see the musical in the near future!


Jagged Little Pill: The Novel follows the intertwining lives of five teens whose world is changed forever after the events at a party.

Adopted Frankie struggles to see eye-to-eye with her mother—who would rather ignore a problem and preserve their “perfect” life than stand up for what’s right. Jo just wants her mom to accept her queer identity—and is totally crushed when Frankie, the only person who really gets her, finds herself infatuated with someone new. Phoenix tries to find his place at the new school and balance wanting to spend time with Frankie but knowing he also has to help out with his sick sister at home. Bella wants to enjoy the end of high school and just head off to college without a hitch. Everyone expects Frankie’s brother Nick to be the golden boy, but even though he just got into his dream school, he’s not even sure he’s a good person. Each of their stories intersects when Bella is sexually assaulted at a party, and it looks like the perpetrator might get away with it.

Moving, heartfelt, and raw, Jagged Little Pill: The Novel draws on the musical’s story and gives readers deeper glimpses of the characters. It’s a story about the power of voicing your pain, standing up for what’s right, and finding healing and connection.