Book Review: Killer in the Crowd 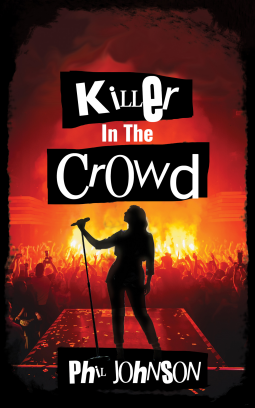 I’ve been on a bit of a murder mystery book kick lately, so it seemed only natural to add in a mystery that takes place with a band!  The book follows Cath Edgley.  She may seem like a boring school teacher, but her Mom is a punk legend and so was her Dad.  After the man she believed to be her father is found dead, many believe he may have been murdered, including Cath.

Cath’s Mom, Betzy Blac, has been missing since Cath was 7 years old.  No one knows if she just ran off or if she died.  Cath decides she is going to get to the bottom of it all and starts receiving mysterious texts telling her to “trust no one”.  Cath finds herself in and out of sticky situations but ultimately ends up suspended from her school teacher job and joins her Mom’s old band, Decollete, for a reunion of sorts.  Cath thinks that if the band is back together, with her playing the part of Betzy, they can get the information they need to find out who killed Raven and where her Mom is.

There are a LOT of different (shady) characters in this book so it makes it a bit difficult to actually have a theory of “whodunit” and many think that Cath is just following a conspiracy theory and that the deaths aren’t at all connected.  Once I got into the meat of this story, it was really hard to put it down, so many twists and turns as we followed Cath into trying to figure out what happened to her Mom.  Quite the roller coaster of a book and if you’re into murder mystery and concerts, this ones for you.

Live music is in her blood, but as the death threats arrive, she fears there’s a Killer in the Crowd…

Cath Edgley is just a normal schoolteacher… until she hears the shocking news that fading rock star Raven Rain has been murdered. Because, to Cath, Raven Rain is more than just a picture on a magazine – he
was also the ex-lover of her missing mother, lead singer of ’80s punk girl band, Décolleté.

Warned by a string of mystery text messages to “trust no one”, Cath is inspired to solve the mystery of her mum’s disappearance, once and for all.

Cath finds herself thrust into the sordid underbelly of the ’80s music scene, when rock and roll played second fiddle to the sex and drugs.

Can Cath find the killers before she becomes their next victim?

Are the superstars she encounters all that they seem?

And what exactly happened to her mother, the punk superstar, Betzy Blac?

If you love mystery thrillers with a musical twist, then you’ll love this debut novel from journalist Phil Johnson.