December 26, 2021 by ConcertKatie No Comments

Last weekend I went to my 29th state- Arkansas. While I am trying to see Hanson in every state, they have never done a tour show in Arkansas so I figured when the opportunity came up to see *a* concert in a new state I would take it.  (Maybe I’ll have to modify it to a concert in every state instead of just specifically Hanson lol) 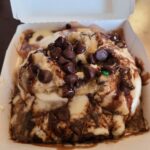 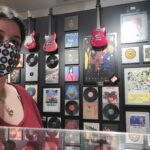 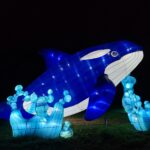 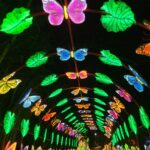 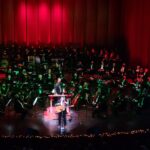 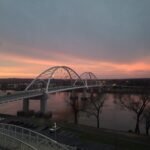 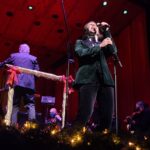 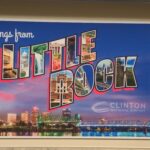 Thursday morning I had a ridiculously early flight out.  It was one of my worst travel days. I had gotten next to no sleep the night before, the flight attendant woke me to ask if I needed the wheelchair I asked for, only for it not to be there when I landed (or someone else took it, there were 3 that showed up and 3 that got wheeled away.)  When I went to find someone to push me, I ended up also being with a man and his seeing eye dog who my pusher barely got to his gate in time for boarding. (He also liked patting me on the shoulder every time he talked to me, which I am *never* a fan of) and when I got to board my final flight of the day I realized too late they “moved me closer to the front” but into an aisle seat which I loathe.

I got to the hotel 3 hours early and their app had no way of me telling them I’d show up any earlier than 4pm.  Fortunately, the girl at the front desk, though super annoyed I was there so early, was nice enough to check on the room I had checked in online with and found out it had just finished being cleaned so I was able to get in early. It was a rainy evening so while I had initially had plans to go to the Zoo for their GloWild event, I decided that would be better off happening the next night, ordered some BBQ and spent the night in my room and did no exploring.

Friday I decided to check out the Old State House Museum that was right next door to my hotel and their “Play It Loud” exhibit about concerts at a venue in Little Rock.  It was really cool and I probably could have stayed there for hours.  I would have, if not for so many without masks on coming through.  The museum even had a penny machine! I checked out some of the other exhibits they had as well and it was really cool.  I ended up going back to the room to order food but falling asleep and waking up in time to get to the Zoo.  Uber and Lyft were VERY slow and not a lot of cars available.  I don’t know if something else was going on this weekend or if that was always the case, but I had to wait 20 minutes for a car who did about 5 other drop offs before getting to me to get to the Zoo.  I also realized that I kept thinking the show wasn’t until 8:30 but that is what time it was EST and what had been showing up on my Facebook Events all week when I was home and doors were actually 6:30 for a 7:30pm start time.  Keeping this in mind, I raced around the loop of the lanterns at the zoo twice (they were so pretty and I wanted to make sure I didn’t miss anything!) and had to get a surge priced Uber for the way back to the concert – but managed to get to my seat 15 minutes before the show started.  (And paid about $2/min I was actually at the zoo, but I am glad that I did it and it all worked out!)

For the first night, I decided to get seats in the front row of the balcony for the show to get a full perspective of the show.  I wasn’t entirely sure what to expect, just knew Kris was super excited about it since he played in the children’s orchestra as a kid.  The orchestra did about 3 songs without Kris and then 3 with Kris and then he left the stage and it was time for the intermission.  Since they were calling it the “Kris Allen Holiday Spectacular” I was expecting, well, more Kris Allen.  For the second half if was about the same – half just the orchestra/choir and half with Kris as well.  At the very end they did a sing-a-long and this was when I decided to order my dinner as I had eaten nothing but a cinnamon bun (which was delicious, I might add) all day and hope that it would have made it to the lobby of the hotel by the time the show was over.  My hotel was connected to the venue which made things nice and easy pre and post show.  Definitely worth the extra money I spent to be closer, hands down. And I only had to wait about 5 minutes for my dinner to show up from the Mexican restaurant.

Saturday I ended up being so wiped out from everything I did on Friday, I had no desire to leave my room at all. I watched some Disney+ and ordered a large late lunch that held me over (I thought I’d do a post show vending machine snack run only to find out it was change only so I was limited to just 1 item) and then headed over for the show around 7.  For the second show, I was front row orchestra seating, so I couldn’t see much more than Kris and the front of the orchestra.  Kris seemed to be a bit more relaxed this show having gone through it all the night before and had a bit more witty banter going on. I ended up enjoying this show much more than the night before – I am not sure if it was because I knew what to expect, or I didn’t have a giant maskless man taking over half of my seat, or because I hadn’t been running around all day or because I was so much closer.  I was glad that I decided to do 2 of the shows though and while Kris was going to be streaming Sunday afternoon’s show, it would be started just as I landed back in CT so I didn’t even attempt.

And it was a good thing I didn’t event attempt the stream.  I tried to get an uber at 4am as my flight out was 7:30am and I wasn’t sure how busy the Little Rock airport would be.  Turns out it is the smallest airport ever and I was off the hotel shuttle, through security and at my gate before 5:30am.  The TSA agent even complimented that I knew what I was doing and must have done it before.  (The first half hour I was at my gate was a steady stream of “who forgot their ID, phone, hat, etc at the checkpoint” announcements)  Upon getting to my gate there was a woman with a violin who proceeded AT SIX IN THE MORNING to play every Christmas song she knew for an hour.  (I kept track of the setlist)  We left Little Rock without a problem, a wheelchair was indeed waiting for me (after a nice pilot helped me get my bag up the giant jet bridge – he told me it was only C that had the long ones, A and B were much shorter) and I only had to go like 2 gates away (of course).  The gate across from mine was the earlier flight out to Hartford (what are the odds) but it was final boarding by the time I realized what was happening to even ask if I could get bumped on to it.  Then I realized all the flights around me were being delayed at least an hour and then I got an alert mine was delayed 20 minutes.  There must have been some bad weather that needed to be diverted somewhere, despite everything being delayed, everything did end up taking off and I landed just 23 minutes later than expected (but the pilots bragged we were 39 minutes EARLY? oh. no sir. that’s not how this works lol)

I’m glad I was able to find some outdoor and socially distanced activities to participate in and not stuck in the hotel room the whole weekend (although it did have a nice bridge view – when it wasn’t super foggy, that is) and cross off my 29th state!