Book Review: Widespread Panic in the Streets of Athens, Georgia

October 13, 2018 by ConcertKatie No Comments 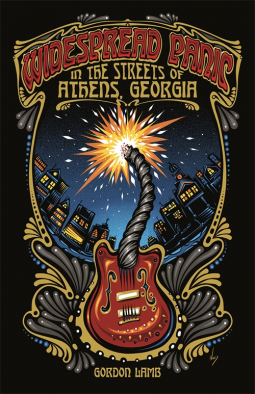 Widespread Panic in the Streets of Athens, Georgia is all about a concert that was held there back in 1998 and referred to as “Panic in the Streets”.  This book is not really a biography of the event, but instead a recount with stories from people who were there.  This was not a casual event, people didn’t just show up, it was all planned.  There even was a wedding at the concert!  This concert opened the door and brought a lot more music festivals to Athens and it still being talked about 20 years later!

In April 1998, legendary southern jam band Widespread Panic held a free open-air record release show in downtown Athens, Georgia, its homebase. No one involved could have known that the predicted crowd of twenty thousand would prove to be nearly five times that size. The ultimately successful show, now known as “Panic in the Streets,” went on to become a cult favorite of Panic fans and a decisive moment in Athens music history. This event still holds the record for the world’s largest record release party, but the full story of how the event came to be has not been told until now.

Widespread Panic in the Streets of Athens, Georgia places readers at the historic event, using in-depth investigation and interviews with the band, city officials, and “Spread Heads” who were there. Told as much as possible in real time, music journalist Gordon Lamb’s narrative takes the reader from conception to aftermath and uncovers the local controversies and efforts that nearly stopped the show from happening altogether.

This deeply researched and richly sourced book follows every stage of the concert’s development from the spark of an idea to approximately one hundred thousand people from all over the world packing the streets of a legendary music town. Taking us back to 1990s Athens through vibrant, on-the-scene writing, Lamb gives us the story of a band on the verge of greatness and a town reckoning with its significant place in music history.