Book Review: We Are The Nerds

October 13, 2018 by ConcertKatie No Comments 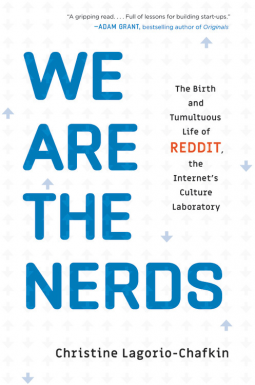 We Are The Nerds tells the story of the birth and tumultuous life of REDDIT, the Internet’s culture laboratory.  It may be a surprise to many, but I do not spend much time on reddit at all.  I am aware of what it is and I know a ton of people who spend hours there checking everything out but for whatever reason it never really clicked as a place for me to check out. However, I am a nerd and I am all about the internet and making webpages and apps and the like so getting to read a bit about how everything behind the scenes went down before the site was created and then trying to figure out how to balance its popularity as well as know what to censor and what not to censor was really interesting to me.  A lot of fun stories from behind the scenes, some sad ones as well.  I learned a lot, even if it did seem to take me forever and a day to actually end up finishing the book. (Where has all my free time gone!? No wonder why I have no time for reddit…)

A riveting look inside Reddit, the wildly popular, often misunderstood website, whose intensely-engaged users have changed the culture of the Internet–“a must-read for anyone hoping to make sense of the century ahead” (Ashlee Vance, bestselling author of Elon Musk).

Reddit hails itself as “the front page of the Internet.” It’s the third most-visited website in the United States–and yet, millions of Americans have no idea what it is.

We Are the Nerds is an engrossing look deep inside this captivating, maddening enterprise, whose army of obsessed users have been credited with everything from solving cold case crimes and spurring tens of millions of dollars in charitable donations to seeding alt-right fury and landing Donald Trump in the White House. We Are the Nerds is a gripping start-up narrative: the story of how Reddit’s founders, Steve Huffman and Alexis Ohanian, rose up from their suburban childhoods to become millionaires and create an icon of the digital age–before seeing the site engulfed in controversies and nearly losing control of it for good.

Based on Christine Lagorio-Chafkin’s exclusive access to founders Ohanian and Huffman, We Are the Nerds is also a compelling exploration of the way we all communicate today–and how we got here. Reddit and its users have become a mirror of the Internet: it has dingy corners, shiny memes, malicious trolls, and a sometimes heart-melting ability to connect people across cultures, oceans, and ideological divides.