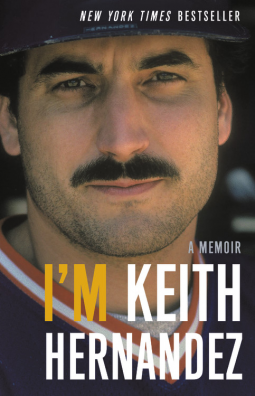 Keith Hernandez was the Mets 1st baseman in the 80s.  Prior to that, he was a Cardinal.  Currently, he can be heard in the booth for Mets broadcasts and has been a bright spot in an otherwise pretty meh season so far from the team.  Last month he released a memoir titled “I’m Keith Hernandez” which is his line in a Seinfeld episode.  Although the book cover features him in Mets garb, most of the book focuses on his life growing up and making his way through the minor leagues and to the Cardinals team.  It was extra interesting for me because most of his minor league time was spent in Tulsa, OK – a place I have been visiting yearly for the past 10 years.  He bounces back to present day as well, as an announcer and how he was preparing to write the book and trying to figure out what he should include.  (He opted to not touch as much on the Mets because he said that era has been written about a lot.)

Keith ended up doing a book signing tour and one of his stops was in Madison, CT!  Keith is one of my favorites in the Mets organization so I knew I had to go.  As luck would have it, I ended up having a business trip just before the signing and so I ended up getting an audio version of the book – which was read by Keith himself.  The book was 9 hours and 45 minutes long – my trip was supposed to be round trip 8 hours. (I did listen to a couple chapters while eating dinner during my trip) I ended up finishing the book just as I was pulling into my driveway – got changed into Mets garb and headed out to meet Keith.

I have to say, the book is great, but if you have the chance to have Keith read you the audio of the book – definitely take it.  It was great to hear his words in his voice and he even laughed sometimes if remembering a particularly funny moment or anecdote.  I felt like I had Keith sitting in the passenger seat with me on my way there and back. When I met him he told me it took him 1 week to record it and asked me how I thought he did, “Oh it was great! I felt like you were in the car with me!” “Well, I was!” he replied.

If you are a Keith fan, a Mets or Cardinals fan, or even just a baseball fan – this book is for you! I definitely recommend it.  I received a free e-copy of this book, purchased a hard copy and audio book version in order to write this review. I was not otherwise compensated.

Legendary first baseman Keith Hernandez tells all in this gripping and literary memoir.

Keith Hernandez revolutionized the role of first baseman. During his illustrious career with the World Series-winning St. Louis Cardinals and New York Mets, he was a perennial fan favorite, earning eleven consecutive Gold Gloves, a National League co-MVP Award, and a batting title. But it was his unique blend of intelligence, humor, and talent–not to mention his unflappable leadership, playful antics, and competitive temperament–that transcended the sport and propelled him to a level of renown that few other athletes have achieved, including his memorable appearances on the television show Seinfeld.
Now, with a striking mix of candor and self-reflection, Hernandez takes us along on his journey to baseball immortality. There are the hellacious bus rides and south-of-the-border escapades of his minor league years. His major league benchings, unending plate adjustments, and role in one of the most exciting batting races in history against Pete Rose. Indeed, from the Little League fields of Northern California to the dusty proving grounds of triple-A ball to the grand stages of Busch Stadium and beyond, I’m Keith Hernandez reveals as much about America’s favorite pastime as it does about the man himself.
What emerges is an honest and compelling assessment of the game’s past, present, and future–a memoir that showcases one of baseball’s most unique and experienced minds at his very best.