June 3, 2018 by ConcertKatie No Comments 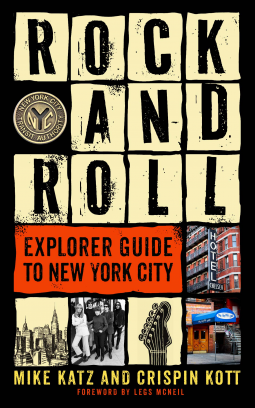 The Rock and Roll Explorer Guide to New York City is a really cool book.  It breaks down different neighborhoods in NYC and how they relate to stories in Rock And Roll History.  There is the address to the location, details about it and photos in some cases.  It is also noted if the location no longer exists, and instead just shares the stories locations.  Certain more iconic bands have their own sections in the book – for instance The Beatles have their own chapter and John and Yoko have a chapter as well.  It was fun to go through and see which locations I have been to (not many) and which I have heard of (some, but nowhere near all).

Definitely an interesting and fun read and a great guide for the next trip to New York City when we aren’t sure what to do or check out!

From the churches and street corners of Harlem and The Bronx to the underground clubs of the East Village, New York City has been a musical mecca for generations, and Rock & Roll Explorer Guide to New York City is the definitive story of its development throughout the five boroughs.

Plug in and walk the same streets a young Bob Dylan walked. See where Patti Smith, the Ramones, Beastie Boys, and Jeff Buckley played. Visit on foot the places Lou Reed mentions in his songs or where Paul Simon grew up; where the Strokes drowned their sorrows, Grizzly Bear cut their teeth and Jimi Hendrix found his vision. Rock and Roll Explorer Guide gives fans a behind-the-scenes look at how bands came together, scenes developed, and classic songs were written. Artists come and go, neighborhoods change, venues open and close, but the music lives on.