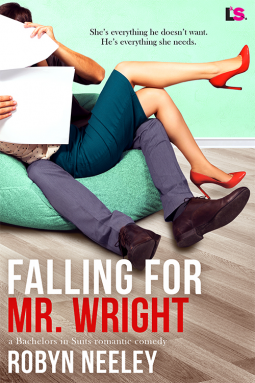 Sarah is working at an office and has a thing for the CEO, Logan.  It’s a good thing that she is lunch buddy’s with the boss’s best friend, Ryan Wright.  Oh wait – did you just figure out what’s going to happen?  Yeah, you probably did… if you can put two and two together from the title.  Ryan is no longer interested in love and decides that he will try to fix up Logan with Sarah – until he realizes that maybe, just maybe he is ready for another relationship.  Ryan ends up taking Sarah to an event at his High School where Logan is being honored but unable to attend. Everyone thinks that Sarah and Ryan are a couple and Ryan really starts to think once he sees his ex and her husband – and she is pregnant. (Ryan was dumped 2 weeks before his wedding – no wonder the guy doesn’t want to be in relationships anymore).  While he is torn for a bit in helping Sarah get what she wants (Logan) or helping himself gets what he wants (Sarah)… Sarah may ultimately end up falling for Mr Wright.

After being dumped two weeks before his wedding, civil engineer Ryan Wright’s not interested in love. Been there, done that, had the wedding deposits to prove it. Still, he can’t help lusting after the fiery redheaded executive assistant who’s stirring up feelings that aren’t exactly appropriate for the office.

Sarah Leonard is determined to make the CEO fall in love with her. To execute her plan, she’s going to need a little help in the form of her lunch buddy, the 6’2” office hottie who just so happens to be their boss’s best friend. Who better to tell Sarah everything she needs to know to win the other man’s heart?

Ryan agrees to help Sarah put her plan in motion, but he has no intention of helping her win anything. In fact, it’s time to show his office crush that he’s the guy she should be falling for…