Book Review: Rock With You

December 9, 2016 by ConcertKatie No Comments 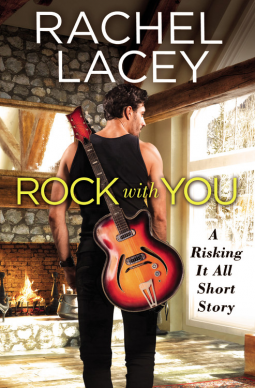 Carly Taylor took over her grandmothers bakery in a small town of Haven.  One morning she sees what she thinks to be a rockstar outside the door waiting to come in.  But why would he be in her small town? She was listening to his album as she was baking that morning so maybe her imagination just got the best of her.  But then she realizes that Sam Weiss is really in her bakery.  Later that day he calls and asks for her to make a delivery of some of her sweet treats to him.  An ice storm is about to hit and she thinks that she can make it to his place and back, but the weather comes in earlier than expected and the two end up stranded at his place for a couple of days.  Sam hasn’t been able to write any new songs, which is why he is in Haven, until Carly arrives. Then he can’t seem to do anything but think of lyrics. (ok, that’s not true. He can do a few other things too ;))  Will their couple of nights stranded result in Sam’s next hit song?

This was a short book which are my favorite kinds and any book dedicated to girls who have had a rock star crush can’t be bad!

SWEET AS SUGAR. SEXY AS SIN . . .
Carly Taylor is pretty sure she’s dreaming. It’s not possible that Sam Weiss – rock star god and sexy hotness personified – is actually in her bakery. This sort of thing never happens in the too-small town of Haven. Or to her. And being stranded in a secluded mountain cabin with the deliciously decadent Sam during an ice storm? This is definitely not Carly’s real life . . .

Now there’s just the two of them, a roaring fire, lots of food and drink, and a sizzling attraction – one that just might make Carly do the unexpected. For one night, she’ll live the fantasy. For one night, nothing else matters. . . not her struggling business, not her lonely life, not Sam’s bad-boy reputation. But sometimes one night can turn one crazy, beautiful dream into something real.