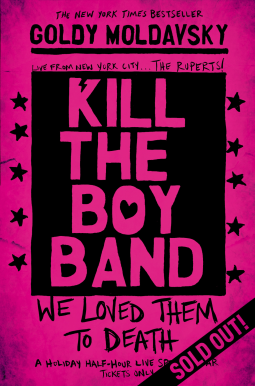 Warning: This review may contain spoilers. If you don’t want to know about the plot of the story before reading it, you might want to not finish reading this review./

You know that when I saw a book titled “Kill the Boyband” I just had to read it right away. The writeup was about how fan girls get a bad rap – and that others just don’t understand.  This was something I could definitely relate to and being that I love me some boybands, I was hoping I’d end up loving the book.  And I did! I actually read it super fast because I couldn’t put it down.

The book follows 4 “fangirls” – Apple, Erin, Isabel and our narrator.  I’m not exactly sure what her name was or if we were ever really told her name because her and her friends all seem to take up aliases based on 80s movie characters.  They all met because of the band “The Ruperts” who were put together on a British talent show and are all named, you guessed it, Rupert.

The band is in town for a show in New York City and the girls end up getting a room in the same hotel as the guys in hopes of getting a chance to be close to them.  The girls are some of the more over the top fan girls (I feel like I can talk – even though I have done some of the things they have done -but I mean… just like getting a room in the same hotel and having a website. Not like… the rest…) and when Apple heads out to get ice she comes across Rupert P and knocks him out and drags them to the girls room where they tie him up.  They think keeping his eyes covered will keep them in the clear – he won’t know who to blame if he doesn’t see them, but of course Apple being the Rupert P fangirl of the group at some point decides that they should uncover his eyes.  The girls end up getting his room key and loot the rest of the bands room while they are off at soundcheck for the show.

Later they come back to the room to find that Rupert is dead – and all begin to turn on each other trying to find out who did it.  They decide to move the body to the band’s room in hopes of getting the blame off of them and on to the band.  Of course, this leads to the band being arrested and tons and tons of fans claiming they are alibis or they did it instead. (Those poor cops)   The truth does come out – even though there seems to be several cover ups along the way (I won’t give away everything)

While the author claims she is not a boyband fan girl – she seemed to get a lot of things right on.  I especially LOL’ed when she talked about how the tweets had bad grammar and spelling.

If you are a fan girl and love the boybands and murder mysteries (kind of) and humor – then I think you will definitely enjoy this book. It was a pretty quick read for me.

Fangirls get a bad rap all the time – people say we’re weird, hysterical, obsessed, certifiable. But those people don’t understand. Just because we’re fangirls, doesn’t mean we’re crazy. It’s important you know that up front. Because everything I’m about to tell you is going to seem . . . well, crazy. From thrilling debut author Goldy Moldavsky comes Kill The Boy Band, a pitch-black, hilarious take on modern fandom and the badass girls who have the power to make – or break – the people we call ‘celebrities’.