December 20, 2009 by ConcertKatie No Comments 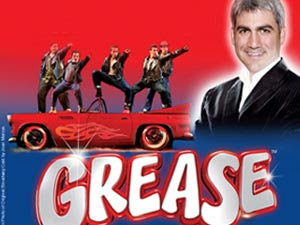 My long time friend Lisa and I had decided that we were going to take our Moms to see Grease at Oakdale for their birthday/christmas. We finally worked out a date and time when we would all be available (Sunday December 20 at 2pm) and as I was going to get the tickets, I saw that the Sunday 7:30pm show was being offered for 50% off. I contacted Lisa and she said that was fine so we went for the “bargain” show instead.

Meanwhile we found out that Ace Young, one of my favorite American Idol contestants, had joined the production as Danny Zuko. (We already knew Idol winner Taylor Hicks was in the show was Teen Angel)

A couple of days later I got an email that the 7:30 show was canceled, but we could use our tickets for any other day. Once again I contacted Lisa and we were back to our original Sunday 2pm slot.

Except Saturday night we got a HUGE snow storm – a foot or so of snow around where I live. My mom checked at 8:30 and it said the show was still on so she and my dad dug the cars out of the driveway. At 11:30 she told me we would be leaving in an hour to make sure that we got there in time and had time to switch our tickets. I went to Livenation.com and it said that the 2:00pm show was ALSO canceled.

Now I am just waiting on the refund from livenation – total bummer – we had missed going to this show when Ace was in it on Broadway as well. I guess it is just not meant to be…